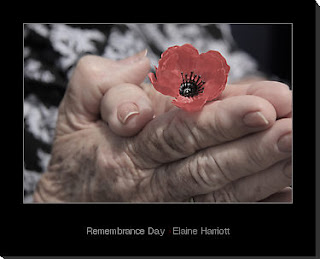 This entry is cross posted at The Moderate Voice.
Posted by Owen Gray at 8:41 am

We definitely have a much different country than the one most of older our veterans fought for.

Interesting how "conservative" in both Canada and the US comes more and more to equal "power monger at any cost."

Here in BC we will have the referendum on the HST and one MLA's website is quite astounding. The MLA John Rustad and many of his commenters believe the people are useless and anything they don't "understand" should be forced on them for their own good. The will of the people can be discredited and thwarted when it is, in these folks view, wrong.

Those who served in WWI and WWII would be appalled that anyone in Canada is not thoroughly ashamed to believe this and to put it in print.

There will be some who will claim that Mr. Harper is like any other politician, and that expediency is the name of the game.

But Harper is more than a hypocrite. He governs with the conviction that he is the smartest guy in the room. As Caesar told Mark Antony, "Such men are dangerous."