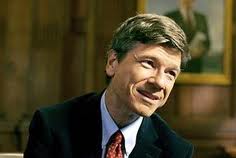 Americans woke up on Saturday to find that their politicians had not driven off a cliff. There is cause for hope. But, like previous stop gap measures, the eleventh hour agreement doesn't solve long term problems. It merely buys time. Jeffrey Sachs, of Columbia University, puts recent budget skirmishes in context:

The current budget negotiations have been a dialogue among the wealthy. The big debate has focused on which programs for the poor should be axed first. There has been no discussion of raising taxes on the rich, and quite the contrary, the White House and the Republican leadership agreed to further tax cuts last December. Obama has repeatedly expressed regret at slashing community development, energy support for the poor, and other programs, but he is not fighting the trend, only regretting it.

Sachs then draws attention to The Peoples Budget, which has been advanced by the Congressional Progressive Caucus. Like Paul Ryan's plan, the People's Budget would reduce the deficit by 2021; but it

would do so in an efficient and fair way. It would close the budget deficit by raising tax rates on the rich and giant corporations, while also curbing military spending and wrestling health care costs under control, partly by introducing a public option. By raising tax revenues to 22.3 percent of GDP by 2021, the People's Budget closes the budget deficit while protecting the poor and promoting needed investments in education, health care, roads, power, energy, and the environment in order to raise America's long-term competitiveness. The People's Budget thereby achieves what Ryan and Obama do not: the combination of fairness, efficiency, and budget balance.

The poor don't vote; and they cannot afford to buy lobbyists. Their voice has been missing in the current debate. But, writes Sachs, Americans have been here before:

Twice before in American history -- during the Gilded Age of the 1880s and in the 1920s, just before the Great Depression -- big corporate money effectively owned Washington. But in both eras great progressive leaders (including the two Roosevelts, Theodore and Franklin) came along to restore the true meaning of American democracy: a government truly of the people, by the people, and for the people. With public protests against government by the rich now spreading in Wisconsin, Ohio and beyond, and with the launch of the People's Budget by the Congressional Progressive Caucus, a great national movement to restore American democracy has begun.

The genius of American democracy is that, for over 235 years, its citizens -- from the Civil War to The Great Depression -- have always done the right thing. That's not to say that there has not been unnecessary suffering and mountains of foolishness. But, in the end, government of the people has worked for all of the people.

Email ThisBlogThis!Share to TwitterShare to FacebookShare to Pinterest
Labels: The Budget Deal