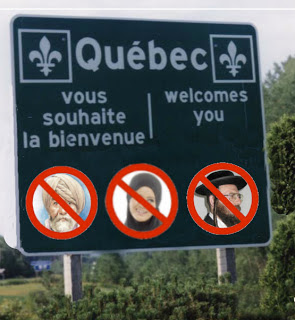 Now that the Quebec Charter of  Values has been officially unveiled, it's clear that Pauline Marois and her party are appealing to an old strain in Quebec life -- fear of those who aren't like nous autres. It was there in Abbe Groulx's anti-Semitism. It was there when Paul Larose and his confreres kidnapped James Cross. In fact, in Quebec, fear of the other is nothing new.

But, by targeting the clothes and the religious symbols people wear, Marois is making it easy to identify "the other" -- thus, making them targets of hatred. Tasha Kheiriddin notes that Marois links multiculturalism with terrorism:

She extolled France’s policy of state secularism while lamenting that “in England, they’re smashing each other in the face and throwing bombs because of multiculturalism and nobody knowing any more who they are in that society.”


And Kheiriddin reminds her readers that:

Marois also seems to have forgotten another piece of history. Most of the people throwing bombs in this country in the last fifty years have not been “multicultural” terrorists, but Quebec separatists. In the late 1960s, the Front de Libération du Québec targeted English-owned businesses, Canadian institutions (including the post office), as well the Montreal Stock Exchange, where an explosion injured 27 people in 1969. In over 160 attacks, eight people were killed, including Quebec cabinet minister Pierre Laporte, murdered during a kidnapping. As recently as 2001, three Second Cup cafes in Montreal were firebombed by persons associated with the FLQ and the “Brigade de Défense du Québec”.


When the elected leaders of a society stoke the fires of fear, that society is on the brink of truly nasty behaviour. That is what comes of appealing to our darker angels.

Email ThisBlogThis!Share to TwitterShare to FacebookShare to Pinterest
Labels: The Quebec Charter Of Values

I do fear that this is opening the door to all kinds of nastiness, Owen. On yesterday's Power and Politics ballot box question, Should public employees be banned from wearing religious symbols? 69% said yes. It is a very troubling statistic, given the usually progressive political audience the show attracts.

It's particularly troubling, Lorne, because Marois intends to use this issue as a basis for a referendum.

She will claim that a clear majority of Quebecers favour the Charter, while all the federal parties stand opposed to it.

People are playing into Marois' hands.