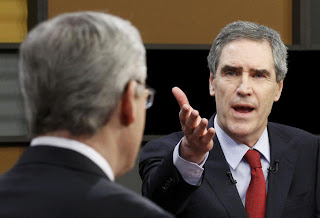 Give Michael Ignatieff credit. Time and again last night, he reminded Canadians why this election was called. When Stephen Harper tried to make the point that the election was about the economy, Ignatieff countered that it was about democracy. "We need to rebuild our democracy after Mr. Harper," Ignatieff said,

Mr. Harper cannot be trusted with the institutions of our country. This is a man who simply will shut down anything he can’t control. He shut down Parliament twice,” Ignatieff said, referring to the Conservatives’ decision to prorogue Parliament on two occasions.

The historical significance of the recent non-confidence vote is lost on Harper. He is the only Prime Minister in the history of all the British parliamentary democracies to be found in contempt of Parliament. To Harper, the vote was merely parliamentary sleight of hand: "simply a case of the other three parties outvoting us." That statement encapsulates the Prime Minister's character. And, in the end, this election is about the Prime Minister's character. Since the current Conservative Party is a one man show, the man is the party. Both are full of seething resentment for the opposition -- particularly Ignatieff. But Ignatieff is right:

You’ve got to walk the walk here, Mr. Harper, and you haven’t. You keep talking about Parliament as if it’s this little debating society that’s a pesky interference in your rule of the country. It’s not. It’s the Parliament of the people of Canada.

Like Harper's PMO adviser, Bruce Carson, Mr. Harper was a bad hire. He is not the man who interviewed for the job. As Jack Layton -- who was at the top of his game -- said last night:

You’ve become what you used to oppose. You’ve changed in some way ... You said you’d clean up Ottawa from scandals and now we’ve got the most closed secretive government we’ve pretty well ever had.

This election is about the Prime Minister. Like the hundreds of thousands of Canadians who lost their jobs in the Great Recession, this man -- who claims to be an economist -- should be encouraged to find employment elsewhere.
Posted by Owen Gray at 7:27 am