Voting for a Constitutional Crisis 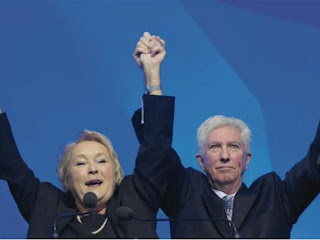 There have been red flags galore throughout this election campaign. From Bruce Carson, to "big boss" Dimitri Soudas, to fake lakes and gazebos which were required for "border security" in Tony Cement's riding -- there has been ample evidence of what Stephen Harper used to decry. But Harper himself raised the biggest flag of all last week when he questioned the opposition's right to form a government.

But asked whether the opposition parties would have the “right” to form government, Harper said “that’s a question, a debate of constitutional law.

“My view is that the people of Canada expect the party that wins the election to govern the country ... anything else, the public will not buy,” he told Peter Mansbridge.

Harper also said that if his party comes in second in the election, he would not form a government — even if asked by the governor general in the event the front-runner failed to win the confidence of the Commons.

“If the other guys win, they get a shot at government and I don’t think you challenge that unless you are prepared to go back to the people,” he said.

“We’ll be into another election before too long. That’s why I think I need a majority mandate. I think this has gone on long enough.”

“There’s only one requirement for being the government and that is you must enjoy the confidence of the House of Commons,” said Franks, professor emeritus at Queen’s University.
“It’s not a constitutional debate. Constitutionally, there’s absolutely no question. There are ample precedents both in Canada and abroad to support it.”

So we could face a constitutional crisis when the House returns. Or we could face one later. William Johnson in The Globe and Mail reminded English Canada that nationalism's winds are blowing again in Quebec.

Pauline Maurois, who is likely to displace the Liberals and form the next Quebec government within two years, emerged triumphant from the weekend convention of the Parti Québécois with a confidence vote of 93 per cent, the highest in the party’s history. She promptly announced that a PQ government, as soon as it was elected, would enact a program of gouvernance souverainiste – that is, would occupy various jurisdictions now exercised by the federal government.

One of the reasons the Liberals are doing so poorly in Quebec is because the provincial party -- under Jean Charest for three mandates -- have tarnished the brand. And, when Quebecers wish to change governments, they only have one option.. Some might argue that Mr. Harper would simply let Quebec go. But it has never been that simple -- not when Quebec is in the middle of the country. Moreover, if Mr. Harper deals with Quebec's demands in the same way he has and intends to deal with the opposition parties, the country is in deep trouble.

Irresistible force meet immovable object. Add to that Mr. Harper's demonization of the Bloc Quebecois for his own ends. Any Prime Minister who claims -- as Mr. Harper has -- that his government has rendered Quebec separatism irrelevant is a fool. The question before us is, "How many Canadians wish to march in a Fool's Parade?"
Posted by Owen Gray at 8:42 am

well one thing Harper is good at and that is insulting those with a little bit of inteligence!

How could someone who professes to be a Christian be such a big fat liar?

One of the reasons the Liberals are doing so poorly in Quebec is because the provincial party -- under Jean Charest for three mandates -- have tarnished the brand.

Could be part of it, however, The Federal Liberals and the provincial Liberals for many years have done quite a job of detaching themselves from each other, especially in recent years.

In 2008, Charest campaigned for the Bloc, due to anger to the Harpercons and Mario Dumont's blatant brown nosing of Harper. The Federal Liberals never came into play in that feud.

Likewise, with Charest's scandals, the Federal Liberals have done quite a job in keeping themselves detached from them.

Bizarre things are happening in La Belle Province that I'm just not getting. For openers, how does someone as unpopular as Pauline Marois get a historic 93% approval rating from her delegates? Especially when the knives had been out for her for a few years now. Not like there weren't other leaders in waiting like Pierre Curzi or Bernard Drainville or even Gilles Duceppe, whom elders like Parizeau and Landry like.

Anyway, while it may well be likely Marois and the PQ would win the next provincial election, it's still quite far away, 2012-2013. Looks like Charest is going to hang in. Operation Hammer has been effective and no one is bothering him to launch a public enquiry anymore.

Marois and the PQ, on the other hand, just adopted policy that will prove to be very unpopular with even the nationalists; that is expanding Bill 101 to CEGEPs and post-secondary education. None of my Francophone friends like it one bit. Some have told me they may send their kids out of province when they finish high school here. So, will the CEGEP in Bill 101 be their demise? Could be.

Also, we can't rule out the ADQ just yet. Francois Legault has launched his movement and manifesto. Many polls in the past have said that if Legault's movement turned into a party, they would win. Same if he led the ADQ. I think it's possible the ADQ and Legault's little group could merge into some center-right party that could potentially beat both the Charest Liberals and the Marois PQ.

The best answer to your question, Collette, came from Mahatma Ghandi.

When he was asked if he had ever considered becoming a Christian, he reportedly answered that he would have considered it -- if he had met one.

True Christians are few and far between.

The Federal Liberals and the Provincial Liberals have always had an uneasy relationship, ck.

When Robert Bourassa passed Bill 22 -- the precursor to Bill 101 -- Pierre Trudeau was not on side. And let's not forget that Charest was originally a Mulroney Conservative.

It would be interesting to see what might happen with a rebirth of the ADQ.

That said, if Harper has a hard time dealing with the opposition parties in the House of Commons, one can only imagine how he would get along with a PQ government.

Let's face it -- Harper has no idea how Quebec works.

No he doesn't. And the PQ, if elected the next provincial election, have promised to give the next federal government, whatever its' make-up may be, some major head-aches. They do plan to demand more powers.

Charest, indeed if from the old Mulroney school. Mulroney did understand Quebec somewhat better than Harper ever did or ever will.

Absolutely true, ck. Not only did Mulroney understand Quebec better than Harper, he understood the Conservative Party better than the current prime minister.

There is -- or was -- a large segment of the old Progressive Conservative Party which Harper had no time for.

Let's not jump to worrisome conclusions about what a PQ government might do. There's a lot of breathing space between now and the next Quebec election. If a PQ government should take power, it's not certain they'll run a referendum - as Mr. Harper would have us believe.

The splash Jack Layton is making in Quebec suggests the people of Quebec aren't fixated on sovereignty. Even Mr. Duceppe's "Parlon Quebec" hasn't given the Bloc much of a lift.

In my opinion, Mr. Harper is not so much ignorant about how Quebec works as he is anxious to precipitate a crisis from which he can make electoral hay - and damn the consequences.

Despite his patriotic rhetoric for the past five years, he's not exactly a Canadian champion,is he?

In a speech to a mostly American audience several years ago, Stephen Harper called Canada "a second rate socialist country."

The next time he professes his "true patriot love" for Canada, the public should be reminded of the previous quotation. In fact, the country needs to be reminded of many things Mr. Harper has said in the past.

He's no patriot. He's merely a hypocrite. One hopes that Quebecers can see through the man.