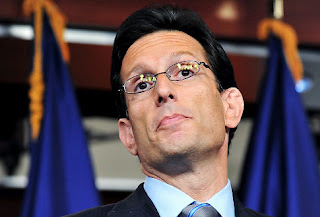 In this morning's New York Times, Paul Krugman again has the modern Republican Party in his sights. I say "modern" because, traditionally, Republicans have been noted for sober common sense. But, because a Republican majority rests on Tea Party support, sober common sense is nowhere to be found within the ranks of the GOP -- except perhaps, in John Huntsman's organization -- and he has no chance of convincing the GOP base of anything.

No, the man with Republican mojo is Eric Cantor. Krugman writes that:

a few weeks ago, Mr. Cantor was the hard man in the confrontation over the debt ceiling; he was willing to endanger America’s financial credibility, putting our whole economy at risk, in order to extract budget concessions from President Obama. Now he’s doing it again, this time over disaster relief, making headlines by insisting that any federal aid to the victims of Hurricane Irene be offset by cuts in other spending. In effect, he is threatening to take Irene’s victims hostage.


Cantor, like most of his colleagues, is a hypocrite. During the Bush Administration, he and his party voted for the Iraq War, the cost of which is "$800 billion and counting." and  "in 2004, when his home state of Virginia was struck by Tropical Storm Gaston, Mr. Cantor voted against a bill that would have required the same pay-as-you-go rule that he now advocates."

Political hypocrisy is nothing new. What is new is the Republican Party's methods."Not long ago," Krugman writes:

a political party seeking to change U.S. policy would try to achieve that goal by building popular support for its ideas, then implementing those ideas through legislation. That, after all, is how our political system was designed to work.

But today’s G.O.P. has decided to bypass all that and go for a quicker route. Never mind getting enough votes to pass legislation; it gets what it wants by threatening to hurt America if its demands aren’t met. That’s what happened with the debt-ceiling fight, and now it’s what’s happening over disaster aid. In effect, Mr. Cantor and his allies are threatening to take hurricane victims hostage, using their suffering as a bargaining chip.


John  Boehner originally refused to call the House of Representatives back to deal with America's unemployment crisis. Now, having ensured that the president will not interfere with a Republican candidates debate, he has agreed to let the president speak before a joint session of Congress. The pettiness is breathtaking. Americans would be stupid to put the Republicans -- the party which has taken its fellow citizens hostage -- in charge after November, 2012.

The question is: How smart is the average American?