The Rich Have Declared That The Poor Are The Enemy 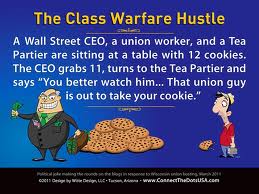 When President Obama proposed higher taxes on the very wealthy this week, Republicans were apoplectic. Once again, they screamed, "Class Warfare."  A look at the numbers exposes that lie. Paul Krugman writes in this morning's New York Times that:

Detailed estimates from the Congressional Budget Office — which only go up to 2005, but the basic picture surely hasn’t changed — show that between 1979 and 2005 the inflation-adjusted income of families in the middle of the income distribution rose 21 percent. That’s growth, but it’s slow, especially compared with the 100 percent rise in median income over a generation after World War II.


Meanwhile, over the same period, the income of the very rich, the top 100th of 1 percent of the income distribution, rose by 480 percent. No, that isn’t a misprint. In 2005 dollars, the average annual income of that group rose from $4.2 million to $24.3 million.

Meanwhile, everyone else has been paying for the roads to transport their goods and services, the police to protect their places of business, and the teachers to educate their children. As Elizabeth Warren, who is running for the Senate in Massachusetts, said this week: "There is nobody in this country who got rich on their own. Nobody!"

Republicans would like you to believe that the very wealthy owe their fellow citizens nothing. And they are prepared to go to war to make it so.

It baffle me how those tea party folks take positions that are not in their best interests. They do not seem to realize that government regulations protect them in many ways. They all will need social security, and medicare, and unemployment insurance. Surely, universal health care paid by government at half the cost of private insurance health care and better general outcomes is to tea bagger's advantage. They have some genuine beefs against large wasteful government but their solutions make things worse and not better.

I am always concerned with our own Conservative government which make decisions on the basis of ideology rather than the best scientific and bureaucratic advice. The tough on crime legislation is just the latest of many such decisions.

The same is true of the Conservatives stated intention to get rid of the Canadian Wheat Board, Philip.

That policy favours factory farms, not family farms. And the recent vote by farmers is a clear indication that they (the farmers) want to keep the Wheat Board.

Warren's and your comment is dumb at best. Last time I checked business owners also paid taxes for the roads, police and firemen.Personally AND through their business.

It wasn't exclusive of the working class. In fact percentage wise the "rich" do pay more in taxes so based upon this poor logic they should use these services more?

You can tell when someone never made payroll in their life or created a business from scratch.

Based upon your and Warren's comment it is as if business owners are "stealing", when in fact it's a fair trade. No one is forcing you to buy a product. When in fact with taxes from a gun.

Warren's reaction was not that far from another Warren's take on the issue. Warren Buffet claims that the real issue is how progressive -- or regressive -- the tax system is.

In the past thirty years, the Right has argued that a more regressive tax system is more efficient and more equitable.

As Krugman notes,the second claim is simply not true.

Teddy Roosevelt -- the trust buster -- believed that, unless taxes were strongly progressive, the road would be unobstucted for people he called the "malfactors of great wealth."

He, his cousin Franklin, and Buffet believed in an old principle -- noblesse oblige.