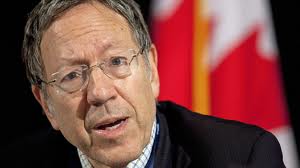 When Peter Van Loan admitted this week in the House that the Conservative Party had been behind a campaign to spread the rumour that Irwin Cotler was resigning, he did so without a hint of embarrassment. More than that, Bruce Anderson writes, " he took cynicism to an new jaw dropping level:"

No mumbling the normal apologies about “overzealous workers, blah, blah, blah, won’t happen again, etc.” Instead, Canadians were told that this kind of grime should be considered vital free speech – and must be protected, not prevented, by our laws. Efforts to rein it in would have worse consequences than letting it continue. This was the sound of a politician who had left home without an ethical or moral compass that morning.


It was yet another indication that the Harper government lives in an Orwellian world -- where War is Peace, Ignorance is Strength and Freedom is Slavery.

Anderson, however, pulls no punches. This was not some kind of clever political strategy:

this is wrong. Not clever, not amusing, not evidence of a more sophisticated political machine that works all the angles while others are asleep at the switch. Just wrong on every level.


Yet this government professes to be tough on crime. It stands for family values. Its base claims to be militantly Christian. But it admits telling lies and it calls them free speech.

"A man is but the product of his thoughts," Gandhi said. "What he thinks he becomes."

There is a reoccurring pattern among political groups such as the Harpercons - their failure almost always seems to flow from their rampant egoism. Attempts at extreme political control of the message and opponents leads them to evermore extreme acts of corruption and political immorality. Convinced by their perceived success, they gradually come to believe that they are invulnerable and that their actions reflect some divine plan. Then suddenly the house of immoral cards begins, as a result of some over-zealous act, to crumble, and such people are genuinely surprised by Fortuna's sudden change of heart. Such people are usually judged badly by history and go to their graves convinced that they had done the right thing despite the overwhelming condemnation of history.

No indeed. It reminds me of a Pete Seeger song: http://www.youtube.com/watch?v=CUb8RAyLf80

One gets the impression that each member of the Harper caucus views this clip every day before Question Period.

And let us not forget that Ross Perot, Preston Manning and Stephen Harper are political bedfellows.

I think your conclusion, Kirby, is absolutely accurate. Mr. Harper's regime is not an isolated case.

History is strewn with the wreckage of tyrants whose hubris was their undoing. Mr. Harper's knowledge of history fades when it goes beyond his own birthday.

"And let us not forget that Ross Perot, Preston Manning and Stephen Harper are political bedfellows."

To be honest, I miss Manning. He seemed much more honest than Harper. Perhaps that's why he never managed to form a government. Though he may have had more influence over his opponents than Harper.

As for Perot... I must confess I can't remember much. I know that the Pete Seeger song was sung back when it was timely and topical. I don't recall Perot as a liar. I thought he was kinda likable...

But I might be confusing him with this guy:

If only Ross Perot had found a home on Sesame Street. On second thought, perhaps we should be grateful that he didn't.