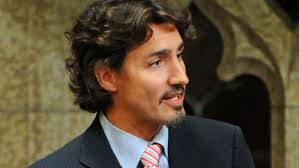 Justin Trudeau had his fuddle duddle moment yesterday. When Environment Minister Peter Kent responded to Megan Leslie's criticism of the Conservatives' performance at Durban by saying she had no right to criticize the government because she had not been there, Trudeau lost his cool.

After all, it has been long standing Canadian practice for opposition members to accompany government representatives to international conferences. But the Harper government has put an end to that practice. Elizabeth May went to Durban on her own -- and was seated as a member of the delegation from Papua-New Guinea.

To accuse Leslie of ignorance because the government had refused to let her attend the conference was dumbfoundingly hypocritical. Hence, Trudeau's response -- for which he immediately apologized. Lawrence Martin writes this morning that:

Justin chose a low-taste phrase for which he should be reproached. But we’re not exactly in an era of eloquence. Profanity is increasingly used and accepted, privately and publicly. Swear words sell.

On the one hand, what happened in question period yesterday is a sad example of how irrelevant Parliament has become. Yesterday, Gloria Galloway reported in The Globe and Mail that the Conservatives are proposing "to move more of the debate at Commons committees behind closed doors."

Someone has to call a spade a spade. Peter Kent is not a piece of excrement. But what came out of his mouth yesterday was.
Posted by Owen Gray at 8:48 am

good grief! First it was Pat Martin's F-Bomb on Twitter in reaction to Harper invoking closure on something as important as the budget and now Trudeau calling Kent a piece of sh*t over Kent's response to Megan Leslie.

IF swearing from MPs is making bigger news than the actual reasons behind the swearing in the first place, it's our media that has a big problem.

Right on target, ck. The government's objective is get rid of what few checks and balances we have.