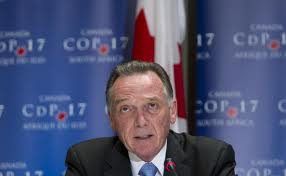 David Olive writes in today's Toronto Star that Canada has many "firsts" to its credit:

First in North America with universal health care and prudent branch banking. First on this continent to take up arms against the fascist overthrow of Europe, and first with peacekeeping. First to spearhead the Commonwealth sanctions that hastened the demise of apartheid in South Africa. First with insulin and first to explore the potential of stem-cell research.


But when it comes to the world's most pressing problem -- climate change --  Canada is racing to the back of the line, and trying to get other nations to follow. It is deeply ironic that the Harper government -- which claims to know how to manage the nation's economy -- should be so pig headed about climate change:

To be crass about it – and maybe that’s what environmentalists should do – the financial punishment we inflict on ourselves by failing to reduce emissions translates to between $21 billion and $43 billion in lost economic activity for Canada by mid-century.

That’s the financial price we’ll pay for global warming, calculated not by NGOs but Ottawa’s own National Roundtable on the Environment and the Economy. And that estimate is based on a modest degree of global warming.


Moreover, trumpeting their majority, the government refused to accept Elizabeth May as a member of the Canadian delegation. So she sits at Durban, representing Papua-New Guinea. The latest polls suggest that Ms.May speaks for the majority of Canadians:

The latest polling on environmental attitudes, reported by Environics Research Group late last month, finds that even at this time of peak concern over the economy, more Canadian identify global warming as the greatest threat to the world than terrorism or any other issue.

And 56 per cent of Canadians want Ottawa to sign onto a new global climate treaty, even if its more ambitious CO2 reduction commitments mean job losses at home and higher prices for energy.


Canadian proclamations at Durban make absolutely no sense, until you remember that the Government of Canada is headed by Stephen Harper -- a man who, according to Peter C. Newman, has "the best medieval mind in the Commons."
Posted by Owen Gray at 8:38 am

Email ThisBlogThis!Share to TwitterShare to FacebookShare to Pinterest
Labels: Canada at Durban