What's A Border For? 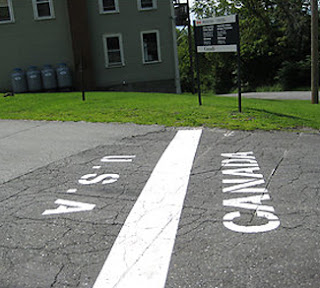 Perhaps it was inevitable. Historians for a long time now have been predicting Canada's eventual integration into the American Empire. The agreement which Stephen Harper and Barack Obama signed last week is just another step along the way. And, besides, say the commentators, it's not just inevitable -- it's painless.This week, a Globe and Mail editorial  called it "a good thing." Most Canadians will not notice the changes we have accepted.

It's all about paperwork. Less paperwork makes business more profitable. But to make business more profitable, we have paid a price. Tom Walkom notes that "the agreement requires Canada to adopt more U.S.-style security measures — and share more information on Canadians with the U.S."  However, those measures are vaguely defined: the agreement refers to "informal information sharing." Ask Maher Arar what that phrase means.

Canada has agreed to share information informally with a country which, since 9/11, has drastically infringed upon the rights of its own citizens. Walkom reminds his readers that:

As a result of the 9/11 attacks, the U.S. has suffered a kind of psychotic break. It spies on the most mundane habits of its people, such as which library books they read. In at least one case, it has carried out the extrajudicial execution of an American citizen.

Its agents are no longer permitted to torture people on their own. But even Obama has refused to renounce the practice of so-called extraordinary rendition — sending suspected terrorists to third countries to be tortured.

It maintains a prison camp at Guantanamo Bay that, in the understated language of a 2010 Supreme Court judgment, has engaged in the “improper treatment” of detainees — including a Canadian.

Years ago when I was travelling around Europe, the Germans knew every time I entered or exited a Schengen Agreement country. They knew the exact date, time, and location.

Your experience, Skinny, illustrates precisely what we have lost.

Not many seem to care. But they will -- once life becomes uncomfortable for them.

"Terrorism" is the greatest friend to imperialists and dictators.

People are afraid of their own shadows now and beg the government to lock them in pens and watch over them with 24-hour surveillance to "keep them safe."

These same people who trust the government to spy on them will simultaneously refer to politicians as "a buncha dirty crooks."

The disconnect never occurs to them.

There are so many things, thwap, that simply don't occur to them.