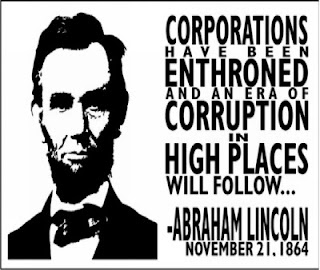 Harper’s contempt for Parliament is systemic and reflexive. He bundles budgets into huge omnibus bills, trampling the ancient right and duty of parliamentarians to monitor the government’s management of the public purse. He forces parliamentary committees to operate behind closed doors, presumably to prevent any public washing of dirty government laundry by witnesses or opposition MPs. Opposition MPs who dare reveal what happens behind those closed doors can be found in contempt of Parliament and so muzzle themselves.


The government's objective is to promote the interests of the corporate class -- whether it be by putting an end to strikes before they begin, or protecting Chinese and Canadian investors in the soon to be approved trade pact with China:

In fact, elevating corporate rights over the rights of citizens and their democratic institutions seems to be the Harper government’s core agenda. Its aggressive “free trade” stance has led to agreements with Panama, Jordan, Columbia, Iceland, Liechtenstein, Norway, Switzerland and Honduras. It’s negotiating with the European Union, India and the Trans-Pacific Partnership — not to mention its groundbreaking 31-year trade deal with China, slated to be signed next week with no parliamentary debate, let alone approval. Several of these countries are under authoritarian rule.


Russell points to the late Samuel Huntington's 1973 report to the Trilateral Commission.  In the 1960's, he wrote, the world experienced a bout  of "democratic distemper, as people demanded more of government while challenging established authority."

People no longer felt the same compulsion to obey those whom they had previously considered superior to themselves in age, rank, status, expertise, character or talents,” the report continued. “An excess of democracy means a deficit in governability. There are potentially desirable limits to the indefinite extension of political democracy.”

Huntington went further, claiming the effective functioning of democracy requires a measure of apathy and non-participation by some groups. Democracy’s governability was further threatened by the awakening of “previously passive or unorganized groups in the population — blacks, Indians, Chicanos, white ethnic groups, students and women — all of whom became organized and mobilized in new ways to achieve what they considered to be their appropriate share of the action and the rewards.”


What the world needed, Huntington suggested, was more apathy. Apathy would clear the way for the corporate state. Stephen Harper has taken the late professor's advice to heart.

Canadians know, Harper cheated to win the election. No doubt about that, what-so-ever.

Harper is a Traitor. Selling Canada out to Communist China is High Treason. No-one doubts that either.

The omnibus bill, seems as though it was written up by lunatics. Harper's behavior is so bizarre, we are wondering his sanity. The bill doesn't make a lick of sense.

Harper's evil is extreme. Canada is no longer a democratic country. Our Civil Rights and Liberties have been taken from us. Now Harper is taking our, Freedom of Speech from us.

Who would ever thought Canada, an evil Communist country?
Shame on Harper's Comrade Minister's, for supporting a monster, such as Harper.

If the latest polls are to be believed, Anon, Harper's support is waning.