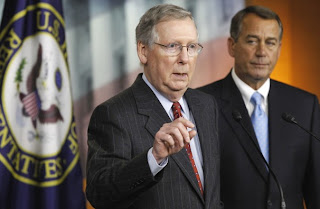 Mitt Romney's supporters are engaging in the same kind of perverse politics which the Romney campaign has practiced. Two days ago, David Brooks suggested that there was an upside to Romney's opportunism: If Americans elect Romney, Brooks wrote, he will work with intransigent Republicans and more reasonable Democrats.

Brooks is not the only one to make this argument. The Demoines Register has based its endorsement of Romney on the same argument, as has the Orlando Sentinel. Ezra Klein writes that these endorsements validate Mitch McConnell and John Boehner's policy of unrestrained obstruction:

These endorsements are proving Republicans right. As they show, the Republican strategy to deny the president any cooperation and make his Washington a depressing and dysfunctional place has done Obama enormous political damage. In that way, the endorsements get the situation backwards.


However, there is a huge downside to this strategy:

If this strategy wins Republicans the election, they’ll employ it next time they face a Democratic president, too, and congressional Democrats will use it against the next Republicans. Rewarding the minority for doing everything in their power to make the majority fail sets up disastrous incentives for the political system.


If Romney wins the election, respect for the truth in political campaigns will have reached a new low. But, more ominously, he and the Republicans will have ushered in a new set of political imperatives which will shake the foundations of the American political system.

This entry is cross posted at The Moderate Voice.
Posted by Owen Gray at 10:22 am