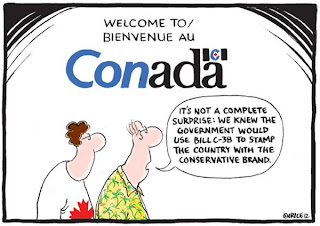 Natalie Brender writes in the Toronto Star that two former Clerks of the Privy Council, Mel Capp and Alex Himelfarb, recently spoke out about the Harper Government's concerted efforts to sabotage the public service:

Befitting the nonpartisan role they previously held, Cappe and Himelfarb each delivered strong but not overtly political speeches. A subtext running through their remarks, however, delivers an undeniably political message. Taken together, their comments suggest that the risks the public service should be grappling with today are not the ones the Harper government is forcing it to address — and that diversion of public servants’ attention affects the vital interests of all Canadians, whatever their political views.


Himelfarb has been warning for sometime now that the policies the Harperites are implementing -- with religious ferocity -- are self-defeating:

What our public service ought to be tackling, Himelfarb’s speech urges , are the challenges of adapting itself to a new age. Some facts remain constant: “the public service continues to be critically important to our quality of life, to our economic performance and to our international standing.” But organizational models of authority and information-sharing are transforming, and “public issues are more complex, often with no historical precedent, and with multiple poles of conflict.” To reinvent itself in response to these changes, he says, the public service must become more creative, open and connected to Canadians.


And Capp insists that the public service should be focused on the well being of future Canadians:

The proper role of public servants, Cappe says, is to produce “economic, social, scientific and environmental analysis that takes into account the long run and future generations’ interests.” Though they should not talk publicly about policy, they “should be encouraged to talk to the public about their science and their research.” Yet such information-sharing is being thwarted by the Harper government’s obsession with stifling perspectives that might diverge from its chosen policy path. Their disregard of public servants’ analysis and evidence in favour of ideologically-based policymaking is well documented. So too is their restriction of researchers’ and analysts’ capacity to share insights with the public.

The Harperites know that the evidence is against them. Essentially, they have chosen to defend the indefensible. The information the public service generates -- at the ELA or at Statistics Canada -- proves that government policy is wrong headed.

And, in pursuit of what is demonstrably false, this government is quite prepared to destroy the public service.

Email ThisBlogThis!Share to TwitterShare to FacebookShare to Pinterest
Labels: Destroying the Public Service

Having read both pieces, Owen, I am very much struck by the contrast between careful, deliberative thinking and the kind of shrill hate-mongering and demagoguery of the Harper regime as it denigrate the very notion of public service. The former, of course, demands something from the reader/listener, while the latter requires and expects only knee-jerk reactions.

Sadly, the latter has yielded such dividends for the Conservatives that they are sure to adhere to the same sordid course until the public wakes up to the crass way they are being manipulated by their government.

The Harperites have always seen the public service as the enemy, Lorne, from the first day they assumed power.

They have known from the beginning that they could not justify their policies on the basis of fact.

So they determined to dispose of facts -- using any and all possible methods.

One of the most anti-democratic, cynical acts that Harper took happened when he first came to power.

He installed what I call Political Commissars in the PMO and erected the equivalent of an informational Berlin Wall to separate the Canadian people from their public and armed services.

Henceforth, communications from the public, including the media, would have to be submitted and vetted by the Commissars. They alone would decide what could be communicated, what could be asked of members of the armed forces and public service. They would then vet any responses that were permitted to ensure they conformed to government policy.

The corporate media protested lamely and then submitted and almost nothing has been heard from them of this ever since.

In this way Harper and his PMO quite effectively transformed the public service and the armed forces into their own partisan, political agencies. They cemented their political capture of these agencies with intimidation and surveillance ("minders").

This is the very sort of thing we once ridiculed and denounced in tyrannical regimes.

There was a time when the media would have railed against this sort of abuse and ensured it was laid bare in front of the people. When was the last time you detected any such outrage? Such is the fate of any country that permits the rise of a corporatist media cartel.

Your use of the term "commissars" hints at the source of this operation, Mound.

It's Soviet style information control. And news organizations which railed about "Soviet style conspiracies" never raised their voices in protest.

People of BC were perfectly aware of Harper's treachery. We posted many times to watch out for Harper, he is a snake in the grass.

CSIS even warned of Communist China's, huge invasions into Canada. BC was specifically mentioned, Campbell gave BC to China long ago. No-one would listen to us.

In BC if you don't speak Chinese Mandarin, you don't qualify, for a BC mine job.

Just to who, is Harper outsourcing all of the resource jobs to? Chinese resource workers earn, $800 per month. What part of that, don't people get?

Harper is set on establishing a corporatist agenda, Anon. He will pay no attention to anyone who opposes him.

The only hope for change is to vote him out of office.