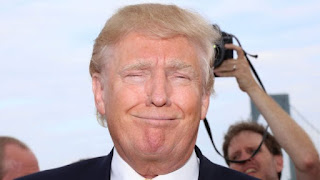 Michael Gerson puts Donald Trump's attack on Syria in context. It's not just that Trump is uninformed, he writes. It's that he's unformed:

Like on health care, he seems to be encountering these issues for the very first time. It is unlikely that he played through the scenarios of humanitarian intervention and regime change during campaign policy briefings with national security experts. Trump’s Stephen Bannon-ridden inaugural address claimed that the world’s troubles are not the United States’ problem. But then there are the “babies” killed by an apparent nerve agent.


What drove Trump's quest for the presidency wasn't ideas. His ideas are totally inconsistent. What drove his quest was his need for applause:

Inconsistency is the most consistent theme of Trump’s young presidency. During the campaign, he opposed entitlement reform, yet his health-care bill contained the most fundamental entitlement reform — moving federal Medicaid spending from an open-ended match for state spending to a capped amount per person — that Congress has recently considered. He campaigned as a tribune for the working class, yet his economic approach seems heavily tilted toward the interests of the wealthy.

a complete unfamiliarity with the issues and debates at the heart of American politics. He never encountered these matters during previous government service (which he did none of). He was not forced to explain his views during primary or general election debates (a few lines from the stump speech more than sufficed). Trump was not hiding an inner sophistication. His ignorance was presented as part of an anti-establishment package — as contempt for the quibbles of smaller men.


What will he do next? Who knows? But when the uninformed and unformed meet, the result is usually chaos.

American politics under Trump is really a spectacle Owen. It's almost painful to watch.Watching Trudeau agree with Trump ("the uninformed and unformed") is even more painful.

It's a circus, Pam. And the participants are like elephants hanging on to each others' tails.


If this news article is true then we are in deep trouble.
If Trump risks war because one of his spoiled brats is upset we are in for one hell of a ride.

Trump has never had to answer to a board of directors, TB. He has always run a small family business. It appears that he's trying to do the same thing with the American government.

Have you yet to be surprised by anything President Trump has said or done since his election? Including what looks like a populous attack on Syria? Americans may not have got what they needed, but what they did get, they sure had the right to expect! No surprises. Isn't that the hallmark of an honest politician?
CD

None of this should come as a surprise to Americans, CD -- if they were paying attention.

What's a 'populous attack'? Is that a Bannon thing? Enquiring minds and all that...

Trump keeps proving himself a profoundly inexperienced, ignorant and incurious 70-year old man. I expect his deep narcissism compounded his lack of interest and knowledge about the world around him. He has no depth of knowledge and his "go to" sources of information - open mouth radio, Fox and Friends, tabloids etc. give him a skewed world view.

All that money, Mound, but there's no wealth of knowledge.

And today, another profoundly inexperienced White House Speaker named Sean Spicer made the incredible statement that the head of Syria is worse than Hitler because - in his words - Hitler didn't gas his own people. This guy started out over his head and continues to be over head in that most important of job which is representing and speaking on behalf of the US President.