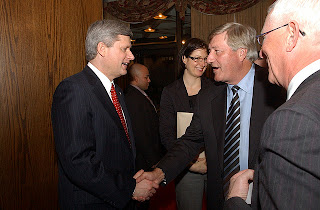 The Conservative attack machine is primed and ready to go. When Justin Trudeau  becomes leader of the Liberal Party in ten days, the Conservatives will unleash the same kind of smear campaign they used on Stephane Dion and Michael Ignatieff. Their message will be that Trudeau is a lightweight with a thin resume.

But Bob Hepburn writes in the Toronto Star that the Harper Party would be wise to rethink that strategy. Both the federal and the Ontario Tories have chosen leaders who, at the time of their ascension, offered pretty thin gruel:


In comparison, Harper’s work resumé when he became Canadian Alliance (nee Reform) party leader in 2002 was even thinner than Trudeau’s is today.

Other than working in a few low-level jobs, starting in the mail room, for Imperial Oil in Alberta, Harper has spent his entire life in conservative politics. He has a master’s degree in economics from the University of Calgary, but never worked as an economist.

Mike Harris dropped out of the first university he attended to become a ski instructor, later taught a few years in a North Bay elementary school before quitting again to work at his dad’s ski-hill operation and later as a golf pro. He was first elected as an MPP in 1981, served only a few weeks as a minor cabinet minister in 1985 and became party leader in 1990.

And, like Harper, Ontario Progressive Conservative leader Tim Hudak possesses a master's degree in economics. But he has never worked as an economist:

Tim Hudak’s resumé is even weaker than that of Harris. Although he earned a master’s degree in economics, he has never worked in that field. Instead, he worked for just one year as a Walmart travelling manager before being elected as an MPP in 1995 at age 27. Hudak served as an undistinguished junior minister in the final years of the Harris government.


Trudeau the Younger has a more impressive resume than either of the Three H's:

And while Trudeau’s resumé does lack major business or institutional accomplishments or a lengthy track record in a profession, it is not without reasonable heft. He has a BA from McGill University and a bachelor of education degree from the University of British Columbia. He taught social studies and French at Vancouver high schools, served as chair of the now-defunct Katimavik youth volunteer program, studied engineering at the University of Montreal and was partway to a master’s degree in environmental geography at McGill when he was elected in 2008 as a federal MP.


So, when the blitz begins,  it would be wise to remember that four H's are behind it -- Harper, Harris, Hudak and Hypocrisy.

A point well taken, Anon. Both do not have long records of public service.

But both JT and Obama have better resumes than the three H's.

I remember when the main thrust of the the elder Bush's campaign against Clinton was that he lacked the experience to be an effective president. When it became more and more clear that Bush was losing he became desperate and I recall at one rally Bush saying that his dog Millie had more experience than Clinton.

The fact is that as I see it there is no direct connection between experience and effective public service. People can draw on all kinds of life experience to do a good job in politics. And many people with a great deal of experience are complete failures in public office.

I am not a Trudeau supporter but his experience or lack of it has nothing to do with whether I would vote for him or not. Furthermore, I have no doubt that, regardless of what his nay-sayers contend, growing up with Pierre Trudeau as a father has given him a great deal of knowledge of politics and how it works. It is only natural. My father was an artist and his life gave me a lot of insight into various aspects of the artistic world.

I have no idea what will happen after Justin takes over the Liberals, Kirby.

But Justin knows what Harper did to his predecessors. And, from what I read, the operatives in his campaign are smart people.

I suspect they won't allow the Harperites to define Trudeau the way they defined Dion and Ignatieff.

Harper doesn't govern, he dictates. He has pretty much alienated everyone, with his arrogant, stubborn dictatorship.

The House of Commons is, a one man dictatorship show. Harper has muzzled Scientists, his caucus, much of the media are propaganda machines for Harper. No-one dares to make a move, say or do anything, until it goes through Harper first.

Even other country's resent Harper's bullying and his hissy fits, when he doesn't get his own way. Harper is a total shameful embarrassment to Canada and Canadians, everywhere he goes.

Harper is pathetically easy to see through. All dictators have the same typo personalities. None of them win, unless they cheat.

I doubt Canadians will vote for Harper. How can anyone forgive, Harper's destruction of Canada?

The majority of Canadians have never voted for Harper, Anon.

The trick will be getting enough of that majority to vote for one of the three alternatives.

Preston Manning was an old man of 45 when he started the Reform party.

People have forgotten the son of W.A.C., Anon. And Preston also relied on the family name.

There are those in the Conservative Party who only like to conjure up Trudeau's ghost.

Count on them to lose all sense of perspective when Trudeau's son comes back to haunt them.