Are They Better At Trade? 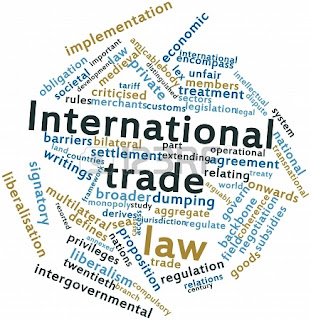 During the last election, Stephen Harper trumpeted the record number of trade deals he had signed. But, Gus Van Harten argues, if you look at the deals, it's clear that Mr. Harper has been selling us down the river:

The right trade agreements can create opportunities for Canada. But the Harper government has seemed more interested in getting lots of deals than in making sure each is good for Canada’s economy.

The three most important deals are:the Foreign Investment Promotion and Protection Agreement (FIPA) with China, the Comprehensive Economic and Trade Agreement (CETA) with Europe, and the U.S.-led Trans-Pacific Partnership (TPP).


We have not been given a lot of information about the deals until now. The TPP has people like Jim Basillie very worried -- with reason. It continues a pattern established with FIPA:

1. The Harper government gave Chinese investors “market access” to Canada — a right to buy what they want in our economy — without getting the same for Canadian investors in China.

2. When Harper announced the deal he said that it “ensures non-discriminatory treatment” for foreign investors. But the terms let China keep all its existing laws, policies, or practices that discriminate against Canadian investors.

3. In FIPA, the Harper government exposed Canada to potentially massive financial liabilities due to the special and lopsided rights it gives to foreign companies, which can seek uncapped amounts of public compensation from governments directly before international tribunals.

One of the reasons Mr. Harper lost the election was because his claim that he was a good economic manager was no longer credible. Careful examination of his trade pacts underscores his economic illiteracy.

We'll have to see if the Liberals are better at trade than Mr. Harper was.

I dont pretend to fully understand these trade deals but do know that any 'deal' that impacts upon our ability to use domestic suppliers for government projects, be it federal, provincial or municipal, is simply wrong and should never be included in such agreements!

"One of the reasons Mr. Harper lost the election was because his claim that he was a good economic manager was no longer credible. Careful examination of his trade pacts underscores his economic illiteracy."

One of the endless reasons Owen let's start here not only the China deal but the TPP so Mister hide in the closet non-statesman does everything in secret. Okay I am your Prime Minister and I will be campaigning in your town but unless you have donated and are a card carrying con-member you can't see me because it is a secret? What? Triple what? See three strikes and he is out for life.

See now the only reason Mr Secrecy is hanging on to his chair in the commons? It's a dead give away secret to avoid having to testify at the Duff scandal trial he will try with lawyers you and I pay for to use execution of the parliamentary privileged.

High time to end this type of BS Harper in his cowboy hat we called them phony drugstore cowboys in Alberta :>

Ain't he cute? If he was not so damaging to civil society who knows what might of been?

He could have caused lots of damage elsewhere, Raven.

Any analysis of the Harper record, Owen, clearly shows that the emperor, indeed, had no clothes.

Its a Harper Turd left on the liberals doorstep. Its impossible for them to not some degree step in it. Chrystia Freeland is seeking our input. http://globalovethinktank.blogspot.ca/2015/11/flush-harper-turd-tpp.html">Please input.

I've read some of the stuff Freeland has written, Steve. She appears to know a lot about her assignment. Let's hope she can undo some of the damage.

Harper really was quite a magician, Lorne. He appeared to produce substance from nothing but air.

Over-anxiety to achieve a deal is an easy read for any party with whom you are attempting to negotiate. Harper's grandstanding pronouncements and overuse of the podium to promote "trade" projects and international deals such as the DRIC put this weakness in bargaining position and ability on a billboard. He's the kind of trader who would end up paying the customer to take the goods off his hands just so he could claim the numbers.

Certain conservatives show a weakness for this kind of behaviour, John. Mike Harris sold highway 407 into private hands a few years ago. The so called party of business can make appalling business decisions.

Harper was never interested in what these trade deals could do for Canada Owen.These trade deals are not about trade. Their about corporate rule. The reason Harper sold us out in every trade agreement he signed was because he was achieving another step toward, transforming the country into a full Neoliberal government.Harpers Neoliberal agenda, completely out stripped his focus on looking after Canadian interests.Trade deals are just another vehicle of Neoliberalism, disguised as a tool for trade amongst countries. Why would a PM sign trade deals that not only are not in the interest of our country, but puts our laws and judicial sytem in the control of Corporations? Why destroy our sovereignty, and democracy and hand control of our country over to Corporate rule? Why would Harper do that? It does not seem rational, but when you look at the context under which he operates, you start to understand all of his destructive behaviour. And the context he works under is Neoliberalism. The one constant that you see from his defunding of social programs, the signing of bogus trade deals,the moving toward privatizing democratically created social programs, the implementing of severe austerity, the disembowling of unions, using military force in Canadian foreign affairs, the creating and presenting of unconstitutional legislation, even his racism is all driven by his forcing, behind closed doors Neoliberalism on unsuspecting Canadians. Much of his behaviour we put down to being highly incompetent, and that in some instances is quite true, but overall he was creating a brand, a Neoliberal brand that would impact the whole of our society. Anything democratic was to be destroyed or sold and not always to the highest bidder.He by his own admission despised the liberal democratic brand, especially as executed by Pierre Trudeau. Why? Why would you despise a system that doesn't charge people, but helps them when there sick, a systems that allows everyone to get an education, a system that protects your rights and freedoms by law, A system that provides welfare, when people are down, and a system that provides an old age pension to Canadians at 65? Harper wanted to create his own brand. He called it the conservative brand, but there was nothing conservative about it. It was Neoliberalism. His Neoliberalism has reeked havoc in the country. Unlocking the damage he has done will reveal a trail of his Neoliberal desires, desires when acted on would achieve his Canadian Neoliberal dream.

There is really nothing that I can add to your comment, Pam. You cover all the bases. There was nothing democratic about the man's values.