Is The TPP Dead? 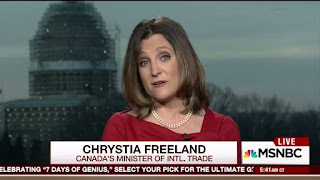 
First, the TPP may not have sufficient support to take effect, since under the terms of agreement both Japan and the United States must be among the ratifying countries. Implementation has been delayed in Japan where politicians fear a political backlash and seems increasingly unlikely in the U.S., where the remaining presidential candidates have tried to outdo one another in their opposition to the deal.

Both Donald Trump and Bernie Sanders have been outspoken critics of the TPP from start of their campaigns. Meanwhile, Hillary Clinton has shifted her position from supporter to critic, recently unequivocally stating that “I oppose the TPP agreement and that means before and after the election.”

If the deal goes down, that's good news -- because new models are emerging for international trade agreements:

Canada already has an alternate blueprint for a trade strategy to open up key markets throughout Asia. By the government’s own admission, the Canada-EU Trade Agreement offers a better investor-state dispute settlement system than the TPP, while the Canada-South Korea free trade agreement, which was concluded in 2014, eliminates tariffs without requiring an overhaul of Canadian or South Korean laws.

There are criticisms of both of those deals, but they offer better models than the TPP.

And a recent analysis by the C.D. Howe Institute claims that the proposed agreement offers Canada  few incentives:

For example, a recent C.D. Howe study found that the Canadian gains may be very modest, with some gains offset by losses on issues such as copyright and an outflow of royalties. Given the limited effect of staying out (the study describes the initial impact as “negligible”), some have suggested that killing the agreement might be a good thing for the country.

The C.D. Howe study, which is consistent with several other reports that found that TPP benefits to Canada are among the lowest of the 12 countries, should not come as a surprise. Canada already has free trade deals with several key agreement partners, including the U.S., Mexico, Chile and Peru. Moreover, some Canadian business sectors have told the government they would be better off removing inter-provincial trade barriers before working to open markets like Vietnam and Malaysia.

The government is currently holding cross-country hearings on the Trans-Pacific Partnership. It will be interesting -- and critical -- to see what Chrystia Freeland and Justin Trudeau decide to do with another piece of Stephen Harper's legacy.

Email ThisBlogThis!Share to TwitterShare to FacebookShare to Pinterest
Labels: The Trans Pacific Partnership

The Free Trade lie will never die, its up there with the immaculate conception and the F35 is a fighter airplane.

The Star has been doing a series of articles on Mexico. Lyin Brian sold us down the river with the NAFTA magic beans.

The invisible hand and comparative advantage, tools of the Trump.

We've lived for too long with these economic myths, Steve.

We're not there yet, Toby. But it appears we're moving in that direction.

John Ralston Saul makes the point that when this era of globalization, free market fundamentalism manifested in free trade agreements, was ushered in by Reagan, Thatcher and Mulroney it was sold on the untested belief of Milton Friedman et al that it would deliver more jobs and better wages for everyone. That was sheer economic alchemy. Before he died Milton Friedman admitted his experiment had conclusively failed.

The problem was that, while it had failed to deliver the jobs and great wages for the people, it was a powerful tool to channel enormous wealth to corporations and those in control of them, the 1%. As the once robust middle class began to collapse the advantaged were quick off the mark to implement "political capture." They insinuated themselves between the voting public and the representatives they elected. Nowhere is this more evident than in today's "bought and paid for" US Congress. Then they got to the executive branch that facilitated "regulatory capture." During Bush/Cheney, industry controlled every important regulatory body.

If you want to see that in Canada, look no further than the National Energy Board and ask yourself why Trudeau has done nothing to replace the Harper-appointed,industry shills that steer it. This is the "evidence based" governance of Justin Trudeau who pledged to accept science yet proceeds to facilitate the planned expansion of bitumen exports when the science tells him that will make it impossible even to achieve Harper's laughably minuscule emissions reductions targets. This is the same Justin Trudeau who said he had no control over the Saudi death wagons sale because it was a "done deal" only for it to be revealed that the deal hadn't been finalized, that the human rights assessment hadn't been completed.

This is the face of neoliberalism, the harbinger of a nation's decline into illiberal democracy. The sooner we face it the better our slim prospects of restoring progressive democracy to Canada.

Assuming we reject these deals, what happens, Mound? How do we send the 1% packing?


If Chris Hedges is to be believed, Owen, it's going to take a revolt. Hedges doesn't champion that because the history of revolution shows that they rarely end well and the new order can be worse than the old, at first.

Some see in Donald Trump evidence of the sort of revolt Hedges fears. Trump's followers don't care that he lies, that he speaks rubbish, that he doesn't offer any clear policy. What they see in Trump is a means to halt the "continuation." Trump purports that he will throw over the new order, "Make America Great" again. He claims that he will sweep aside the rules that favour the few over the many. Heady stuff that.

Other nations need to extract themselves from globalization. That's key to getting out from under the neoliberal order. We're a nation of 35-million affluent people inhabiting a particularly advantaged territory. We need to unlock the shackles we placed on ourselves as the price of admission to globalization. That means a new economic charter that restores the welfare of the nation and people to paramountcy over commercial interests and rights.

I don't want to harp on this but Roosevelt laid out these principles essential to progressive democracy in his Square Deal speech in 1910 and they still hold true today. The very legitimacy of commercial interests is a product of how well they contribute to society and serve the needs and interests of the public. Today that's been stood on its head.

Iceland defied the international order and, instead of ruin, it's thriving today. Malaysia, as Ralston Saul points out, rejected the threats of the IMF and WTO, charted its own path and, likewise, emerged to prosperity instead of economic servitude.

We don't need $100 running shoes made in Vietnam by workers who earn $2 a day. Those $100 running shoes can be made here by workers earning $25-30 an hour, salaries that will be spent in our own economy, rebuilding our middle class. This requires government intervention in trade - duties and tariffs - and in reshaping tax policy to encourage domestic production. It can be done, it has been done. There's a reason why we've been led to believe, and accept, that it can't.

Hedges sees the revolution coming, Mound. He would prefer that it be a revolt. Time will tell how that story ends. Strange, isn't it, that from the perspective of the 21st century, John A. Macdonald's National Policy looks like a pretty good idea? And Macdonald launched that policy in the last Age of Global Trade.

In one of his books John Ralston Saul said that Free Trade always ends in war.

That's how the last Age of Free Trade ended, Toby. We called it World War I.

The real test Owen will be the Canadian government saying no to Neoliberalism. I agree with Toby that there is no such thing as a good ISDS system, no matter how gold-plated Freeland says CETA is. If the TPP does not go through, because the US rejects it (which I find hard to believe), I will definitely be relieved. Canada's government has to start saying no, especially when the US pressure us into signing on to any Neoliberal deal. That is not an easy thing to do, but some countries have started saying no. Depending on the amount of wealth plundered, it's harder for some countries to say no.When Mandella became President of S. Africa there was already a very extensive Neoliberal infrastucture in place controlling S. Africa's capital, labour and resources. Mandella was warned that if he wanted to rid of Neoliberalism in S. Africa, the Neoliberal powers that be would make sure that there would be a civil war. As I said it is not an easy thing to say no to Neoliberals.

I agree, Pam. Neo-liberals have bought and paid for all kinds of legislators. Shaking their stranglehold won't be easy.