Who Should They Serve? 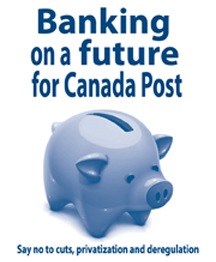 Your local post office used to be a bank -- until 1968. That's when Canada Post got out of the banking business. But, Linda McQuaig writes, there are good reasons for restoring banking services to Canada Post's mandate:


As they’ve turned their attention to catering to the wealthy, Canada’s six big banks have shut down more than 1,700 branches across the country in recent years. In many rural communities today, you’re no more likely to see a bank than a buffalo.

This has left hundreds of thousands of Canadians without bank accounts, including many low-income city dwellers – notably young people with poor credit ratings and lack of identification – who now rely on pay-day loan companies charging annualized interest rates well above 300 per cent.

As email cut into its profits, the executives at Canada Post suggested to the Harper government that getting back into banking could solve Canada Post's woes:

But if the idea seemed like a sure winner, it ran into a major roadblock – the fierce ideological objections of Stephen Harper’s Conservative cabinet. After all, postal banking would be public banking, and the Harperites were hell-bent on shrinking government, not expanding it.

So instead of opting for a win-win strategy, the Harper cabinet came up with a lose-lose strategy for the post office: dramatic increases in the cost of postage stamps and the elimination of home delivery.

But the proposal is back on the table. And it offers distinct advantages -- not just to the post office, but to all Canadians:

A postal banking system could even inject some competition into Canada’s highly concentrated banking sector, one of the least competitive in the world. According to a 2014 IMF report, Canada is among a handful of countries where the three largest banks control as much as 60 per cent of banking assets.

This uncompetitive situation has left Canadian bank customers – even those lucky enough to locate a branch – facing some of the world’s highest banking fees.

If postal offices throughout the country offered a range of banking services – savings accounts, low-fee chequing accounts, low-interest credit cards, small business loans – the big banks might be forced to compete, novel as that sounds.

The CEO's of the five major banks will howl. After all, "even in last year’s sluggish economy, they collectively enjoyed $35 billion in profits – about $4 million per hour per day – with bank CEOs among Canada’s top-paid executives."

But who should the banks serve?

McQuaig's idea makes eminent sense, Owen. Because they have almost no competition, traditional banks feel it is their fiduciary responsibility to treat their customers with disdain. On a personal note, the bank branch nearest me, about a five-minute walk away, just closed. I was told that because they only leased the property, it didn't make economic sense; it has consolidated its services at the main branch, where it owns the land, located about a fifteen-minute fast-paced walk away. While that is not a hardship for me, seniors living in the area, if they are no longer driving, face a major obstacle, one that the bank seems to care not a whit for.

Way back when the Senate recommended......
RECOMMENDATION 2-3: The committee recommends that the federal government work with provincial, territorial and municipal governments to identify ways in which a range of existing and new services might be delivered through existing rural infrastructure points such as rural post offices.
Seemed like a really good idea then and even more so now with declining snail mail...
See my commentary and links to the report at http://ruralcanadian.blogspot.ca/2008/10/senate-report-on-rural-canada.html

Thanks for the link, Rural. You pointed this out long ago. We have yet another example of how blinkered our former government was.

Given what we've learned from the Panama Papers, Lorne, a little competition from the Post Office would help even things up a bit.

But for the smiley faces this government is not ideologically different in any significant way from the last government. Learn not to expect them to have the concerns, needs, wants or wishes of citizens uppermost in their considerations. Rather learn to recognize the subtle differences in their smiles.

It appears that governments change, Dana, but the same people are in charge.

Yeah, this government may end up being the one that convinces me once and for all that voting is a waste of time.

I watched a documentary yesterday called Requiem for America, Dana. In a series of interviews, Noam Chomsky said pretty much the same thing. But, at the end of the film, he also said he hadn't given up hope -- as long as citizens chose to be activists.

Millions of people in the streets in locations across the country for days on end maybe.

Anything other than a show of numbers like that would be written off as malcontents or thugs.

There were lots of new voters the last time around, Dana -- most of them young. When they find out they've been conned, the could give up or . . .

...they could take to the streets and stumble into each other while staring fixedly down at their smartphones.

I'm an old teacher, Dana. I haven't yet given up on the young.


I spent my professional career regularly sparring with banks in court, Owen, and that experience more than anchors my support for a return to postal service banking.

I was involved in a panel discussion on bankruptcy law reform and the fellow beside me represented the chartered banks. At one point I had to interrupt him to note that the banking industry was not a foundational part of Magna Carta and, in fact, banks where no more or less than creatures of statute, the Bank Act, and were designed to serve the nation, not the other way round. The guy was an insufferable prick and it gave me joy to put the knife in and then give it that little twist.

The last forty years have put banks in the driver's seat, Mound. The post office should be able to drive on the same highway. It negotiated the road quite well before before 1968.

Having the Post Office also doing banking is a great idea Owen. She is right that there are hundreds of thousands of low income Canadians who do not have a bank account. I have a few friends who were homeless for awhile. Through no fault of their own, they lost their jobs, then their home and it just spiralled from there. They went onto assistance and there in was the problem. Bringing a welfare cheque to open an account or just to cash it is a no no according to the major banks. They refuse. I had one friend who was an executive with the airlines who lost his job, then got sick and lost everything. When he went to the Royal Bank with his Ontario Works cheque, they refused to cash it. I then asked him if he minded if I went back with him. So we did. When we got their we sat down with the manager. I told the manager that I knew that Ontario Works was a client of the Royal Bank and they not only made alot of money from this client, but they were legally obligated to cash my friends cheque. I had worked on a Capital Markets, implementing large I.T. projects for them (on contract, I would never work full time for them). I also witnessed the software integration of their client Ontario Works.What stood out for me is how my friend had been treated. They have no problem humiliating people who are on the low income rung. My friend is a very proud man and I was enraged by him being treated this way. I kept my anger in check though when I spoke to the manager. Having the Post Office do banking would alleviate this humiliation.I live in downtown Toronto and know first hand there are thousands of people who will not go through the humiliation of trying to open a bank account.Banks all, of them should not be allowed to refuse vulnerable people from opening or at least cashing there government cheques.How society treats it's most vulnerable is all we need to know about ourselves.

The story of your friend illustrates a particular kind of arrogance, Pam. It was the same arrogance behind the 2008 Crash. They called it "Too Big to Fail." The Post Office could change that whole dynamic.