The Party Of The Young 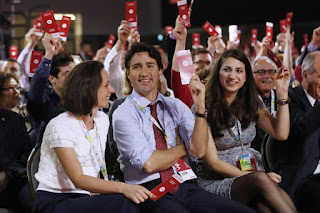 Tim Harper wrote his last column yesterday. In it, he reviewed the state of Canada's three major parties -- which have all held conventions in the last four months:

The three gatherings have provided a real-time barometer on the state of politics in this country.

Conservatives this weekend were waiting to see whether their so-called A-listers will actually run for their leadership or whether a perceived prospect of another seven years in opposition will give some pause.

What most distinguished the Liberal convention was its youthful energy:

The youth gave the gathering energy even if there was precious little to get excited about. Party greybeards were in the minority.

No one is making 2019 predictions this early in the Liberal term, but there can be no question the party feels good about its future.

Harper warned all that could change:

It was a great weekend to be a Liberal in Winnipeg.

It may never get any better, but it cannot last.

You don’t have to trust me on that one. As Trudeau repeatedly pointed out, it was five years ago this month that this party had been all but left for dead.

For the moment, the Liberals are the Party of the Young.

Email ThisBlogThis!Share to TwitterShare to FacebookShare to Pinterest
Labels: The Liberal Convention 2016


Yes, compared to the Cons and the NDP, the Liberals can claim to be the party of the young. Now they must act like it. That means looking at today's young people and planning for their future, their Canada. That means a real shift in policy focus. If the Libs, like their opponents, want to continue courting the seniors/geriatric vote at the expense of the young, the demographic advantage could easily slip through their fingers.

Canada's political apparatus has not resonated well with young people since the start of the neoliberal era. That's why they stayed away from the polls, again and again. Politics didn't resonate with them. It didn't speak to their considerable concerns.

Trudeau captured their support but he has yet to earn it, to consolidate it. He has to address climate change - of the sort today's young will experience. He has to address inequality - of wealth, income and opportunity. He has to address the "stacked deck" of free market fundamentalism and help restore a robust middle class for the young to inherit.

My concern is not with the young. It's entirely with Trudeau. Nifty yoga poses do not make a leader of the stature that today's young so badly need.

I agree, Mound. For now, Trudeau has the support of the young. But, unless he addresses their concerns, he won't keep it. And I suspect they're impatient.

While I agree that "nifty yoga poses do not make a leader of the stature that today's young so badly need" they fly well on social media and tabloid TV news. If the young aren't willing to pay attention to current events they will be stuck with more of the photo op politics that has allowed neo-liberalism to take hold. I had hoped that my children's and grand children's generations would be smarter than mine but, so far, I don't see much to encourage me.

Experience tells me that, when people decide to get involved, they educate themselves on the issues, Toby. I hope that's what's happening now.