It Takes More Than Rhyme To Make Poetry 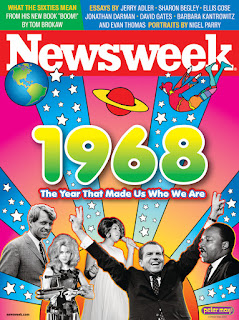 There are some ghostly similarities, Michael Winship writes, between the American election of 1968 and this year's election. 1968 was the year that Martin Luther King and Robert Kennedy were assassinated. It was the year there were riots in the streets of Chicago during the Democratic convention. And it marked the ascension of Richard Nixon at the Republican convention. It was also the year that George Wallace ran as a third party candidate.

Wallace’s crude animal reaction to the complexities of American society found a sympathetic hearing that summer among millions baffled by the speed at which the future was hurtling upon them and frustrated by their individual impotence against the tyranny of vast computerized organizations spreading through American life. With his snake-oil miracle cures, Wallace satisfied a deep public yearning to be deluded with promises of easy solutions.

Wallace's daughter recently pulled no punches when she compared Donald Trump to her father:

George Wallace’s own daughter, Peggy Wallace Kennedy, recently told National Public Radio that both men have played to our basest instincts. “Trump and my father say out loud what people are thinking but don’t have the courage to say,” she said. “They both were able to adopt the notion that fear and hate are the two greatest motivators of voters that feel alienated from government.”


Winship reminds his readers of Mark Twain's notion of history. "History," Twain wrote, "doesn't repeat itself, but it does rhyme."

However, it takes more than rhyme to make poetry.

The worst thing about Trump is he is virtually unopposed.

I don't know about you, Owen, but when I see appeals to the reptilian part of our brain apparently succeeding, my faith in humanity reaches new lows.

I don't think we should ever underestimate how successful someone can be if he or she appeals to our basest instincts, Lorne.

That's what's truly frustrating about Trump, Steve. He gets away with it.


Fear and hate, or at least distrust, are fundamental to wedge politics, Owen. Loyalty is engineered by turning a sufficiently large segment of the electorate against the other.

It has taken me quite a while to accept that politics, as it has come to be practised over the past two decades, is inimical to the public good. From this mutant body politic we come to be beset by rulers, not leaders, whose policies are crafted to suit their personal partisan interests rather than the nation's. The ultimate manifestation of that is when leaders refuse to tackle issues that endanger the public and the country. That was a hallmark of Harper's mode of governance. Sadly we're seeing it in his successor.

The Big Tent seems to have disappeared, Mound.

The fact that in the 21st century there is a Donald Trump campaigning for the Presidency Owen,a racist anti-intellectual man,is what really needs to be understood. How do you have the intelligence and idealism of a Lincoln, a Jefferson or more recently a kennedy, to name a few, then years into the future have the ignorant, arrogance of a Trump?

How do you go from the founding fathers creating the scholarly philosophical and political ideas that layed the foundation to a new nation, then once again, years into the future have cruz, whose only answer to what is best for the nation is a crude, evangelical dogma or a trump whose definition of America at best comes from a Tony Robbins motivational speech? How do you go from reading Mark Twain, F. Scott Fitzgerald, and Sinclair Lewis , again to name a few, to reading comic books?

How do you replace culturally, a philosophical system of thought, where the individual has value as a citizen engaged in a democracy, with an economic, dogmatic, authoritarian system called Neoliberalism where the individual's only value is that of a consumer and the government is run by managers with a technocrat as the leader?

It would take a better mind then mine Owen to understand what has gone so terribly wrong.I do know though, that Trump is the result of a culture which is experiencing the death of all philosophical, political, psychological and social ideas. He is the face of Neoliberalism, bereft of all serious thought.

For a lot of people, Pam, thinking is hard work. It's so much easier to let someone who communicates in tweets do your thinking for you.

And remember, Dana, Trump says he went to and Ivy League School -- the University of Pennsylvania. But then George W. Bush was a graduate of Yale and Harvard. What does that tell you?