The End Of Globalization? 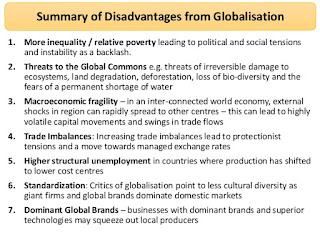 This year's American presidential campaign has given citizens around the world much to trouble their dreams. But, Murray Dobbins writes, behind the ugliness something good may be emerging -- the end of corporate globalization:

Increasingly grim inequality has revealed the broken promise and American workers are pissed. That is in large part what drives the mind-boggling Trump phenomenon in the U.S.: it's not exactly class warfare but Trump supporters sense the system as a whole -- political and economic -- is truly broken. And the support for Bernie Sanders is as close to class conflict as the U.S. ever gets. For the first time in over 30 years, these corporate rights deals are a hot U.S. election issue, with all three remaining candidates opposing the TPP.

But perhaps equally important, the state apparatus itself is showing cracks in its own consensus. This has taken the form of leaks from within the U.S. government about the TTIP and a government study of the benefits of the TPP to the U.S. Both present genuine threats to the future of these agreements in the U.S. And defeats in the U.S. could be the death knell for these deals everywhere.

And the government Cone of Silence which has been erected to protect the corporate juggernaut is starting to crack:

The leak regarding the TTIP came right on the heels of the typical reassuring noises from the Obama administration regarding protection for labour and environment standards in the TTIP. According to the New Republic article, "The Free-Trade Consensus Is Dead": "[d]ocuments leaked by Greenpeace Netherlands revealed that U.S. negotiators working on a trade deal with the European Union have actually been pressuring their trading partners to lower those same standards." The leak was a revelation to the French trade minister who declared that the talks were "likely to stop altogether" as a result. (In 1998 France killed the Multilateral Agreement on Investment, the largest deal ever conceived.)

The second nail in the coffin of free trade consensus in the U.S. came from a U.S. International Trade Commission (ITC) analysis of the benefits the U.S. could expect from the even larger deal, the TPP. The report, released this past week, will be difficult for promoters to explain away:


"[T]he ITC estimates a worsening balance of trade for 16 out of 25 U.S. agriculture, manufacturing, and services sectors... Indeed, output in the manufacturing sector would be $11.2 billion lower with TPP than without it in 2032... the proposed 12-nation trade deal will increase the U.S. global trade deficit by $21.7 billion by 2032."

It's worth remembering that, when Daniel Ellsberg leaked the Pentagon Papers to the New York Times, everything in the United States changed. Hell hath no fury like a nation that's been lied to. Dobbin knows how things work:

Once members of the political elite begin to question the high priests of free trade, the spell is broken, and all sorts of alternative political narratives present themselves. It takes an accumulation of unlikely suspects breaking with the consensus before that happens and we have already seen some high-profile defectors from the TPP -- including Nobel Laureate Joseph Stiglitz, economist Jeffrey Sachs and in Canada RIM co-founder Jim Balsillie. At first the Teflon seemed to hold, but there is always a time lag when it comes to cultural change and their interventions are still playing out.


In Canada, we haven't reached that point. In fact, the Liberals are making noises about bowing to the corporate sacred cow.  They would be wise to watch what is unfolding south of the border.

Email ThisBlogThis!Share to TwitterShare to FacebookShare to Pinterest
Labels: Globalization

It is indeed interesting, Owen, that despite the Trudeau government's claim to be running a more open, responsive and transparent administration than our previous one, the refusal to do anything but be advocates for greater globalized free trade proves otherwise. It is time for our journalists to start asking them the hard questions about these agreements. For example, when Freeland was spouting off about the 'gold-plated' nature of CETA that would benefit everyone, why wasn't she asked to precisely define those benefits?

It was the work that the New York Times and the Washington Post -- along with Morley Safer's work for CBS -- that changed the trajectory of the Vietnam War, Lorne. In the absence of good journalism, truth gets hijacked.

John Ralston Saul announced that Globalization is dead years ago but the trade fanatics keep marching along.

When Ralston Saul's book came out, many -- including me -- thought he was jumping the gun. It wasn't the first time I've been wrong, Toby.


I'm not sure Stiglitz was ever onside with the TPP as Dobbins suggests, Owen. As I recollect he, like Robert Reich, has been against it all along. Anyone who has read Stiglitz' books on inequality would find it surprising that he would ever have endorsed TTP or TTIP. It has gone ten years since John Ralston Saul pronounced globalism dead, and convincingly so. He sees the west as wallowing in this "interregnum" as we await the next great economic model. What has happened is that free market fundamentalism has retained its hold despite consistently failing to meet its promise of more jobs and better wages because it, and the politicians without whom it would collapse, have been diverted into the service of an elite, the rentier class, Wall Street.

Trump promises to take down that parasitical nest but can he be trusted? I'm not so sure but plenty of Americans are ready to roll the dice.

Given that Trump changes his positions on a daily basis, I wouldn't count on his taking the nest down, Mound. But he may bring the whole house down.

Globalization was a ridiculous scheme cooked up by looting robber barons. Make a bunch of money bypassing first-world regulations and wages. (A negative sum game that destroys demand and wealth instead of creating new wealth through human development and cooperation -- i.e., positive sum games.)

But it actually sets the stage for an incredible pivot: globalization inversion. This is founded on the idea that the structure of globalization made the economies of undeveloped countries very dependent on Western markets. Or: the riches of oligarchs are dependent on exports to Western markets. What that means is that when we begin to shift away from looternomics to the more sensible Keynesian mixed-market system, Western nations can force social and green policies on oligarchies like China with tariffs.

Ironically free-trade globalization created an extremely mercantilist world. This is Ok by free-market ideologues, because the rich get to make a pile of easy money exporting production to mercantilist countries like China (which is the only thing they really care about.) But institutionalize international fair-trade agreements that outlaw mercantilism, by forcing countries to distribute wealth instead of amassing foreign currency reserves by running massive trade surpluses -- with the threat of social tariffs -- this will raise living standards and accommodate a transition towards democracy.

(This can also be accomplished by eliminating wildly inaccurate currency markets [and prone to market manipulate schemes] and replacing them with an agreed-upon algorithm that raises the value of currency if a structural trade surplus is produced; essentially same economic indicators that typically determine relative currency value, but regulated instead of free-market. Joseph Stiglitz also talks about creating a world bank that has an independent foreign reserve currency [the bancor]; as the global economy grows, the bank issues new currency to undeveloped countries which will assist in their development.)

The same with using green tariffs to force compliance with international treaties on GHG emissions (and other forms of pollution.)

In short, the West has the oligarchs in undeveloped countries by the short and curlies. This gives the West the power to transform the undeveloped world and eliminate carbon emissions by 2050.

Everything is dependent on ending the failed neoliberal era and establishing a second New Deal with a global focus: one that exposes and eliminates all the corrupt geo-politicking of Western nations that plagued the post-war era and focus on cleaning up the mess the West made of the world during the colonialist (1500-1945), post-colonialist (1945-1990) and neo-colonialist eras (1990-present.)

A really intriguing analysis, Anon. Your suggestion that neo-liberalism is really colonialism in new clothes is -- you'll excuse the pun -- right on the money.

I'm still waiting to hear about the 78,000 new jobs promised for BC coming from the TILMA, an ISDS-containing so-called trade deal between BC and Alberta,signed in 2006.

A similar jobs promise was made for CETA, which also has ISDS, which allows companies and investors to sue the government (ie we the taxpayers) if they don't like our laws and policies.

A trail of lies, Hugh. And it keeps getting longer and deeper.