He Doesn't Know Much At All 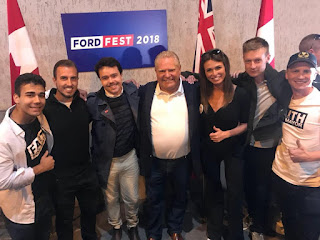 Over the weekend, Faith Goldy attended Ford Fest for the sixth time. She gained notoriety by appearing on the Neo-Nazi website Storm Trooper and Ezra Levant's Rebel Media. After supporting the white nationalists in Charlottesville, Levant banned her from his platform. But she's welcome in Ford Nation and, as Martin Regg Cohn writes,

Now, she is the fringe mayoral candidate who famously posed with Ford over the weekend, and whose photo has gone viral — putting the premier in political peril.

To be fair, our popular and populist premier poses for photos all the time, not least when he hosts thousands of people at a weekend “Ford Fest” with free food and drinks for his base.

Could this be a case of mistaken identity? A blind spot — personal, political, historical — earnestly explained and easily excused?

Faith Goldy, however, is not just any supporter, even if this is her sixth Ford Fest. Accompanied by her entourage of campaign volunteers wearing election T-shirts, she stands out in a crowd.


Given the opportunity to walk back that photograph, Ford refused to do so:

Ford refused to denounce or renounce Goldy and their shared photo in its aftermath Monday. Instead, as a hushed legislature awaited his explanation, he lapsed into partisan rhetoric and personal boasting that left his own Progressive Conservative MPPs uncharacteristically subdued, averting their glances, sitting on their hands.

Does Ford not know his history, our history, world history? Does the premier not know the perennial story of racism and anti-Semitism, Islamophobia and homophobia? Could someone in cabinet or caucus explain to him the role of a political leader as the embodiment of tolerance and defender of diversity?

Email ThisBlogThis!Share to TwitterShare to FacebookShare to Pinterest
Labels: Ford And Goldy

This is all too reminiscent of Trump's antics after the Charlottesville violence, Owen. Clearly, Ford wants to be sure he cultivates his base base at every opportunity.

This is all about those who have failed to see how much the country has changed, Lorne. We are no longer a primarily white, Christian nation. We look like the rest of the world.

The most disturbing commentary from among the many idiotic utterances I've heard from this airhead recently is in the uniformed sloppy estimates with which she's been providing her admirers on the NAFTA question. She hasn't limited her input to Canadian audiences. When Trump performed his rehearsed theatrics in his attack on Trudeau and Canada after the G7, she couldn't wait to appear on Internet broadcasts in the US to accuse Trudeau of starting a trade war. Given the relatively innocuous nature of Trudeau's statements (as Evan Dyer characterized them, "insufficiently subservient") to which Trump made such a show of taking exception, any fool would have understood that he'd just been waiting or any opportunity to perform this stage of his act. Goldy's act in this case was even more sickening.

Like most others who consider themselves to be politically "conservative" or "of the right", she's extremely adept at availing herself of any opportunity to put her natural sycophantic tendencies to work, in this case on a potential audience and for possible career opportunities in the US. I think they can't help it. In any case, Ford is in fit company.

I'm sure others will attach more importance to some of Goldy's other outrages.

I wonder if Deco is printing Goldy's campaign handouts. It would be irresponsible not to speculate.

The lady spouts lunacy, John. The fact that Ford does not take exception to that lunacy tells you alot about Doug Ford.

That is an intersting bit of speculation, Cap. Money is to be made everywhere.