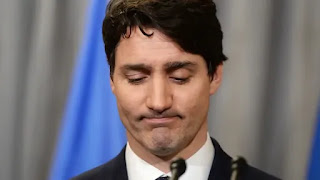 Yesterday was a bad day for Justin Trudeau. The ethics commissioner's report was a no holds barred condemnation of his behaviour in the SNC-Lavalin Affair. Chantal Hebert writes:

To read the ethics commissioner’s accounting of the events is to get the impression that the senior levels of the government essentially functioned as an arm of the engineering firm. The line between the two was not so much blurred as virtually invisible.

The commissioner’s conclusion that the prime minister violated the federal ethics law is unadulterated.

He finds no extenuating circumstances to absolve Trudeau of having applied improper pressures on the then-attorney-general to overrule her prosecutors in their dealings with SNC-Lavalin.

Dion rejects the rationale that the prime minister was only acquitting himself of his duty by trying to mitigate the economic fallout of a negative legal outcome for SNC-Lavalin.

He refutes the notion that because Wilson-Raybould ultimately stuck to her course, no line was crossed, noting that it is not the outcome of the arm-twisting that determines whether it took place.


There is a pattern here: Chretien, Martin and now Trudeau. If Trudeau loses the election in October, his tenure as prime minister will have, indeed, been short. This is the same old politics practised by a new face.

Will Canadians look beyond the face? Stay tuned.

Email ThisBlogThis!Share to TwitterShare to FacebookShare to Pinterest
Labels: The Ethics Commissioner's Report

What next ? Massive Liberal Electoral Fraud ?
At the level that Harper et al blew at Canadians ?
For an 'engineering firm' ?

What ? To 'gift us' with Andrew Scheer
and his bag of warts scumbags ?
The auto vote alt reaction .. al la Ontario election
where a Doug Ford
and his morally bereft scumbaggers could be elected ?

I think that my and many others decision was made long before the JWR scandal months ago and yesterdays announcement had nothing new to offer. Electoral reform was all I needed to vote for the liberals and I thought youthfulness was a fine direction as well. The lies are what turned me and the following chain of events were further fuel on the fire. Vote Green with a conscience.

It appears, sal, that there are no good choices.

I suspect that lots of Canadians will do just that, zoombats.

Interesting that the ethics commissioner concluded that Trudeau had to have known that other senior government officials were contacting JWR about SNC yet previously concluded that Harper could not have known about the $90,000 cheque that Nigel Wright gave to Mike Duffy - remember, where Mike Duffy was charged with accepting a bribe but Nigel Wright was not charged with giving one!

JWR never complained to Trudeau about "undue pressure". Also, she was in her new cabinet position for a month before deciding she had been demoted - I suspect "coached" in this decision.

In spite of all the legal opinions from revered former senior judges, JWR remained steadfast in her decision not to give SNC a DPA. (A DPA is not a "get out of jail free" card, although the media seems to play it up like it is.) By all accounts, she was not a very good lawyer, MoJ/AG, or politician.

Ultimately, there was nothing illegal here. JWR said so. Ethical?

The findings of the ethics commissioner, Owen, are an apt measure of how debased politics has become in our country. As the Mound said yesterday, if the best the Trudeau apologists can do is say their man is better than Harper, that's really not saying very much, is it? As zoombats above said, the betrayal of electoral reform was one of the planks in Justin's coffin for me. The other was the pipeline purchase.

Green is the only choice for me in our upcoming election.

Trudeau's promise on electoral reform was the reason I cast my vote for him, Lorne. I give him credit for putting people to work. But that's not enough.


Not withstanding the current legislation, I'm not sure why workers at the firm or the Canadian economy need to suffer because of illegal acts.

Find the highest ranking execs responsible for the offense and send them to trial.

I agree, J. The folks who make the bad decisions should pay for them. Unfortunately, the effects of bad decisons ripple out from the center -- like throwing a stone in a pond.