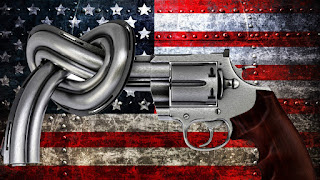 Two days ago, Donald Trump backed down on his pledge to legislate background checks for gun owners. Max Boot writes:

What the hell is wrong with us?


The ugly truth is that the Republican Party is owned by the NRA. Republicans are doing what they've been paid to do, despite all the evidence  that gun control works -- like the assault weapons ban which was in place between 1994 and 2004:

Louis Klarevas, a researcher at Columbia University, found that during the 10 years when the assault weapon ban was in effect, “the number of gun massacres … fell by 37 percent, and the number of people dying from mass shootings fell by 43 percent.” The effect would have been even greater if the 1994 law had fewer loopholes and if it had banned the possession, not merely the sale, of assault weapons and large-capacity magazines. That’s essentially what Australia did in 1996 after a gunman slaughtered 35 people. Australia has had only one shooting since then that killed more than four people — and that was the slaughter of a single family carried out by a relative.


The slaughter continues. And the Republicans -- led by the Coward In Chief -- sit on their hands.

Image: The Daily Beast
Posted by Owen Gray at 8:47 am

Email ThisBlogThis!Share to TwitterShare to FacebookShare to Pinterest
Labels: Republicans And Guns

.. we're not clear exactly what the 'stance' (or if any) of Trudeau on guns in Canada. We are clear on the nonsensical views of Andrew the great white stock bawana Scheer who claims his first whitetail deer kill was from 400 yards (bullshit) and the jerky was delicious blah blah with a friends borrowed gun..

Yours is an interesting post.. the statistics are stunning..

Currently I am very concerned at how Canadian Laws are so easily or retroactively repealed or eliminated.. Harper was especially adept at this, Doug Ford of course, Jason Kenney.. use of 'Notwithstanding' etc.. So if we had a Prime Minister or Prime Mistress of courage and conviction we should insist that our gun laws are sensible and permanent.. I will leave Canada if a wanker like Andrew Scheer or Jason Kenney can pull a Harper/Novak brainfart out of their fat arse to accomodate expanded magazines or military style assault weaponry for deer hunting or pheasant hunting.. and we need serious gun law re possession of revolvers in urban areas. If a person earns a licence to assure personal pistol protection at home.. or for transit to a gun range.. amen..

A long time ago someone at a party was incensed when I intervened as he was trying to get a female friend of mine drunk.. and decided to pull out and play with a revolver.. He failed to recognize my best buddy enter the room behind him.. The 'sleeper' hold was applied swiftly and the gun bagged.. He awoke in jail.. as I was working in a triple maximum security prison and 'had connections' so to speak.. There was not a cop in Guelph who did not know my buddy Dale - head bouncer at the King Edward Hotel.. the party ended peacefully & I did not get shot.. so the thug lived.. but I rolled through 60 uncomfortable minutes of processing dangerous adrenalin levels.. Guns are serious in my past .. as Jimmy Hendrix might say 'are you experienced?' - I was of course.. When my son was born I sold my guns and bought cameras.. Astonishingly I now have many thousands of slides and negatives.. and zero stuffed animal trophies.. my son is no hunter - but is a crack shot with any format of camera on the planet and an ace video editor with a top International ad agency ..

My father commanded an anti-aircraft battery during World War II, sal. As I kid, I asked him why he didn't own a gun. He answered, "I had enough of them in the war." Enough said.


In 1996 Australia experienced the Port Arthur massacre. 35 dead, 25 wounded. The government acted by implementing a ban on semi-automatic weapons, both assault rifles and the civilian equivalent. There were few objections. In subsequent years gun fatalities plummeted.

There are some who will claim semi-automatic rifles are necessary for hunting. I don't see it. If you need a bush gun for bear or cougar attacks, a lever-action 'cowboy' carbine will do the job. But these load a mag, pull the trigger weapons are really unnecessary.

There's a movement for action on handguns but Trudeau must sense himself on thin-enough ice not to risk provoking the gun community in election season. That said, I've not met any from that bunch who would be likely to vote Liberal no matter what.

The gun lobby justifies their support for automatic weapons by stoking paranoia, Mound. Surely, people should see through that strategy.

.. I am a farmboy .. Andrew Scheer is not.. he talks out his ass.. is an Ottawa wanker.. I totally agree with Mound.. I backed my buddy in dense & heavy cover while he was hunting with my Browning 308 cal lever action.. it was my 'saddle gun' on horseback as a farm teen.. and in 25 or 30 years it shot nobody.. & no creatures.. but targets at the range.. I fired a lot of rounds and went through a lot of gun oil cleaning it.. Scheer seems to suggest he needs 'protection' 'on the farm' from dangerous Saskatchewan antelope or ground squirrels. Laureen Harper, Ray Novak and Hamish say the same.. those are scary beasties, those Thompson gophers .. deary me.. you need automatic weapons to fend them off .. they are after your children and chequebook ... so buy a used Sherman Yank Tank.. and a flamethrower to defend the farm.. maybe buy some grenades too.

My dad was an underage enlisted - artillery gunner - Germany France Italy North Africa - never said nor spoke a word about it (the war) & never owned a gun - his dad (my grandad) had a Purdy 12 gauge over/under bequeathed from his grandad for duck hunting but as his best friend was Jack Miner.. the great wetlands advocate, the story is he refused to fire it.. so Amen.. and 'bite me' Andrew Scheer.. haha .. the phony prairie wank 'fresh from the farm'.....who needs a gun

Folks who grow up in the country know that a gun is a tool, sal. It's not used for self protection. It's used to eat, or to keep wild animals away from livestock. Men like your dad and mine saw the damage guns could inflict. And they were glad to leave their guns behind.

Oddly (or is it so), a lot of the gun lovers I know are cops. I've never felt that way about my channel locks and screwdrivers. Wait a minute - maybe my oldest beat-up red Robbie.

I hope cops see a gun as one of many tools in their tool chest, John. A hammer doesn't fix everything.