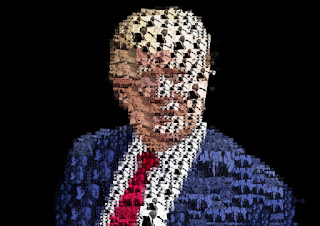 This week, Donald Trump called himself "The Chosen One" and "The King of Israel." He appears to  believe that -- because he has been divinely anointed -- his economic policy is infallible. But, Paul Krugman writes, Trumponomics is just warmed over voodoo economics:

Voodoo economics isn’t just a doctrine based on magical thinking. It’s the ultimate policy zombie, a belief that seemingly can’t be killed by evidence. It has failed every time its proponents have tried to put it into practice, but it just keeps shambling along. In fact, at this point it has eaten the brains of every significant figure in the Republican Party. Even Susan Collins, the least right-wing G.O.P. senator (although that isn’t saying much), insisted that the 2017 tax cut would actually reduce the deficit.

And every time voodoo economics has failed, its proponents concoct magical explanations:

My favorite until now came from Art Laffer, the original voodoo economist and recent recipient of the Presidential Medal of Freedom. Why did George W. Bush’s tax-cutting presidency end not with a boom, but with the worst economic slump since the Great Depression? According to Laffer, blame rests with Barack Obama, even though the recession began more than a year before Obama took office. You see, according to Laffer, everyone lost confidence upon realizing that Obama might win the 2008 election.


Krugman writes "until now," because Trump has gone Laffer one better:

Trump has invented ever more creative ways to blame other people. In particular, he’s now claiming that the promised boom hasn’t arrived because his opponents are hexing the economy with bad thoughts: “The Democrats are trying to ‘will’ the Economy to be bad for purposes of the 2020 Election.”


His failed economics are writing "DEFEAT" across Trumpian skies; and Trump's fragile psyche is imploding. That's why he is even more dangerous now than he has been -- to his country and to the world.

Image: Democracy Journal
Posted by Owen Gray at 9:21 am

That old Republican, Ronald Reagan, liked to say that "facts are stubborn things," Lorne. The complete disregard for facts tells the story of what has become of the Republican Party.

I've see a lot of interviews of Laffer and have yet to hear an interviewer say, "Yes, but that's not what happened."

Laffer is still defending his Curve, John -- even though it's proven to be the economic equivalent of The Flat Earth Theory.

.. we spent a pretty fair amount of time with Americans the past week.. often three sit down meals daily, cocktails twice a day, boat time, on beaches, boating, recreating etc. Essentially very friendly, confident total strangers from all over America, and of course other countries.

Not surprisingly, politics, economics, environment and even comments about racism and sexism drifted in and out of conversation. Trump and GOP were mentioned often.. Not once did I hear a kind word for either. It was unanimous.. the disgust.. the opinion or perception, the embarassment, the sense that Trump, GOP et al had failed America, failed Americans.. failed everything, were liars, thieves. It reminded me of Stephen Harper, his political party et al... that when speaking with intelligent or normal Canadian people.. the same kind of disgust

If a significant majority of Americans are represented by those opinions, sal, then there is some hope. It took us awhile to show Harper to the exit. Americans don't have as much time as we did to show Trump to the door. He's wrecking ball and he's on a tear.