No Time For Apathy 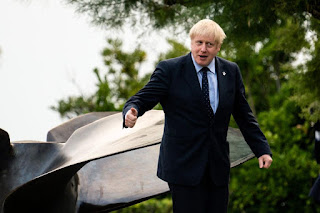 Johnson is putting parliamentary sittings on ice until Oct. 14, just shortly before Britain is due to pull out of the European Union in what is shaping up to be a no-deal Brexit.

Will Johnson pay a political price? If the Canadian experience a decade ago is any indication, probably not. Who knows? Perhaps Johnson was inspired by the Canadian example.

When he was prime minister, Stephen Harper prorogued Parliament twice — shutting it down once in 2008, in the midst of a Liberal-NDP effort to displace his minority government, and again in 2010, because he could. Or, as Harper put it then, to “recalibrate” his government.

There were protests — big ones, on Parliament Hill and even at Toronto’s Dundas Square. Thousands of people, in what may have been the most Canadian protest ever, braved biting cold across the country in January 2010 to stage public events against a word the demonstrators could barely fit on their placards.

The protests dwindled, but opposition parties continued to hammer away at Harper and his alleged contempt for Parliament. Less than a year and a half after those prorogation protests, the Conservative minority government fell — on a contempt of Parliament vote — and Harper was returned to power with a majority in 2011.


Perhaps Johnson expects a similar outcome. But the signs are ominous:

Donald Savoie, who has written many books on the crumbling state of our politics, has a new book out next month on the “disintegration” of democracy in Canada. Savoie says that if the public is apathetic now about parliaments grinding to a halt, it’s because people simply don’t expect much of those institutions anymore.

“Today, the government constantly plays fast and loose with Parliament, and this is true for both major political parties,” he said. “Think of the tendency to turn to omnibus legislation and think also of the tendency to make major policy announcements outside Parliament. It is highly unlikely, however, that this will be much debated during the next 60 days. Sadly, the role of Parliament no longer makes it on the hit parade with Canadians.”


The autocrats are on the march. This is no time for citizens to be apathetic.

Image: The Toronto Star
Posted by Owen Gray at 9:25 am

Email ThisBlogThis!Share to TwitterShare to FacebookShare to Pinterest
Labels: Johnson's Prorogation Of Parliament

Harper now makes his living the same way as Steve Bannon - by advising far-right leaders. I wouldn't be surprised if BoJo got more than inspiration from Harper.

Both men are now getting rich, Cap, by promoting social discord.


When a party is elected to a strong majority on the strength of slightly less than two votes out of five, democracy is in peril. Of those two that it did garner, how many were influenced by solemn election promises that are betrayed shortly after the votes are tallied?

Broken promises - electoral reform, social licence, First Nations reconciliation and more - go to the heart of democracy as governance by the informed consent of the electorate. If you're conned out of your vote by dreamy promises of a guy with terrific hair or, worse, you're voting simply to get rid of somebody else, where is the informed consent?

And what of the slightly more than three out of five who did not back the new majority government? Their voices are often not heard, their participation in national government essentially irrelevant - until the next election looms.

No, I don't see what we have in 21st century Canada as bearing more than a ceremonial vestige of parliamentary democracy. When this is all that's on offer to Canadians how can we expect many of them to become disaffected? We're all but telling them that their voice doesn't matter. It strikes me as antithetical that a democratic government could declare a state of climate emergency and then, less than 24 hours later, greenlight a massive new bitumen pipeline.

The last prime minister that I can recall standing up for the democratic rights of Canadians was Pierre Trudeau who delivered the Charter of Rights and Freedoms. That Charter has safeguarded us from the excesses of ambitious thug politicians ever since. Even the Dauphin ran headlong into the Charter wall on the assisted dying issue.

In Johnson's case, Mound, he was elected prime minister -- as I undserstand it -- by a majority of the 162,000 members of the British Conservative Party.

Yes, Owen, and he might just become the British Conservative Party's very own Kim Campbell. Recall that KC went into the 1993 election with a significant lead in the polls over the Chretien Liberals only to see her party reduced to two seats when the votes were tallied. Could something like that befall Johnson? I doubt it. Not with the British people so deeply divided over Brexit. Then again strange things can happen.

These are strange times, Mound. Madness is fashionable.

.. Doug Ford executed a morman backflip Prorogue with full twist !
That's the new trend.. just prorogue
but with no subsequent HarperStyle 'recalibration'
Take 'Government For The People' on a long winded holiday..
oh.. for approx 1/2 a year.. hell, why not ?
But just keep doing various and sundry legislation, repeals etc
Not sure who 'The People' are.. mebbe uh .. leprechauns ? Fairies?

The people, sal, are those who must be conned.