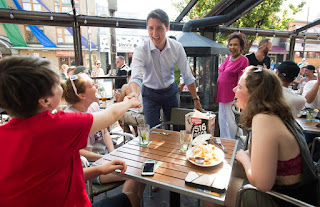 The last six months have not gone well for Justin Trudeau. But he does have one large arrow in his quiver. Tom Walkom writes:

At 5.5 per cent, Canada’s unemployment rate is near historic lows. Inflation-adjusted wage rates are rising again and the stock market is rocking.

Even hard-hit Alberta is doing better.

While worrying signs are emerging about the future of the world economy overall, in North America, at least, things are fine.


On the other hand, there has been much to disappoint:

Once in power, politicians almost invariably disappoint. Trudeau has been no exception. He broke one promise to reform the voting system. He broke another to balance the budget by 2019.

His attempts to curb global warming have satisfied few. On the one hand are those who find the government’s approach too timid. On the other are those who think his methods, such as imposing a carbon tax, are too draconian.

Trudeau argues that this shows the Liberals are hewing to the middle way. That’s one explanation. Another is that on this file he has managed to please no one.

The Liberal government has made significant efforts to help Indigenous people improve their lives. But so much remains to be done that these efforts have earned it little political credit.

As for Trudeau himself, the patina has faded. Canadians are no longer gaga over his star quality. Many, I suspect, are sick of it.


Andrew Scheer and the Conservatives are betting that Canadians are sick of Trudeau:

They present him as a self-absorbed dilettante, who is out of his depth in serious matters of state.

They focus on scandals, real and imagined — the SNC-Lavalin affair, the alleged attempt to silence critics of the government’s China policy, the holiday spent on the Aga Khan’s private island.

They calculate that if they can persuade enough disillusioned Liberal voters to abandon Trudeau, they will win.


And, rather than touting the economy, the Liberals are pointing to premiers like Doug Ford as a potentially dark future:

To that end, they are inventing bogeymen to tie Scheer to — such as former Conservative Prime Minister Stephen Harper or Ontario Premier Doug Ford.


Will it work? Stay tuned.

Email ThisBlogThis!Share to TwitterShare to FacebookShare to Pinterest
Labels: The 2019 Election

.. in my view, Trudeau has to up his game substantially.. not sure what that means re Gerald Butts.. his game appears to suck big time.. I don't recall Butts as a candidate.. but then I don't recall Ray Novak of the Harper garage rental.. as a candidate either.. funny how these bon vivants, gay blades, like Stephen Lecce hatch from poli sci Western or McGill.. and catch the fast freight to the PMO.. Lecce certainly interests me ... knows more about Election Fraud from firsthand experience helping serve it to Canadians under Stephen Harper in 2011.. now he's a Doug Ford toadling MPP .. Politics is rife with such political trash and parasites.. some like Jason Kenney attain mucho power to abuse us with their 'smartest guy in the room' syndromes, cringeworthy 'christianity' or dull, glib froth like Andrew Scheer spews out daily.. 'under my leadership' 'my vision of Canada' .. deary me.. preserve us from these chattering parasites.. Give me a Dr Jane Philpott or Ms Wilson-Reybould anyday.. a Michael Chong, a Nathaniel Erskine-Smith, a Charlie Angus..ie people of merit, trustworthy, hard working, embedded in their communities.. hell, enhancing their communities..

It's interesting to me, sal, that the names listed in the latter part of your comment would never be considered for the leadership of their respective parties.

.. .. sad but true ?.
Michael Chong, Charlie Angus.. and there are others of great merit
I believe Nathaniel Erskine-Smith may become the greatest Canadian Prime Minister or our era some day.. (i may be long gone of course) Have known him since he was a tyke.. just a great kid, a bright light.. Chong much the same.. Wellington County lad.. keeps the family farm top notch.. what he's doing in the midst of Poilievre, Jenni Byrne, Hamish Marshall, Arthur Hamilton et al.. is a mystery.. how does he stand the stench ? Believe he was the first to be eliminated in the Conservative musical chairs nonsense.. it was nip and tuck and back room gooning for Scheer to knock off Michel Bernier on ballot 13 by a few votes.. Just think that over.. Bernier.. how's that 'flavor' & his pronouncements going over currently .. ? Tanking ? Gone subterranean ? Dismal ? And the consolation 'prize' was Andrew Scheer riding to the rescue .. phew.. staged video selfies with hired actors, plaid shirts.. goofy pants, crimped hair & dimples.. how wonderful.. nice paunch too.. quite the deer slayer we hear.. or rather, he tells us.. a 400 yard kill on his first whitetail hunt.. not with his preferred hunting weapon, an automatic AR-15 or similar.. Always good to have a 60 load magazine sittin there in your deer stand watching them deer munch apples you scattered.. 400 yards y'say ? And you jerked the venison to jerky yerself.. WoW .. you da man !!

Please excuse my scathing sarcasm.. not feeling generous today.. Donate ? I will donate to total desperate strangers as usual.. who want to buy a beer or two.. Scheer and Trudeau et al can suck eggs.. hell, we already support them.. and will pension them to the hilt.. and I have trouble understanding why

Just another indication, sal, that insanity has been normalized.