When People Discover They've Been Conned 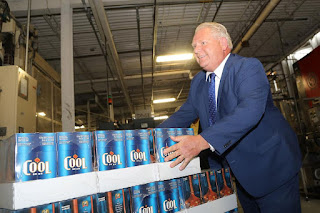 Ford’s campaign team seized on the buck-a-beer slogan to build on Ford’s man-of-the-people persona — notwithstanding his abstinence from alcohol — while conveying his sensitivity to pocketbook issues, no matter how picayune. But the fine print of the promise told a different story.

In fact, the Tories weren’t promising beer at $1 a can, just the possibility of it — by removing an old Liberal minimum pricing policy designed to discourage excess consumption (akin to higher cigarette prices reducing smoking). Whatever your views on beer pricing as social engineering, Ford’s promise was premised on a fatal flaw — an outdated price point.


Ford knew nothing about the brewing industry:

It costs about 34 cents just for the can — without the beer, labour and transportation expenses — leaving brewers with margins (or losses) that were unsustainable.


Then there was Ford's promise of cheaper gas -- which provided his rationale for dismantling Ontario's cap and trade system:

When he won the June 2018 election, Toronto gas prices averaged 131.9 cents a litre; five months later, by the time Ford finally got around to cancelling cap and trade, gas prices had already tumbled to 114.5 cents without him doing anything, and bottomed out at 92.7 cents a litre last February (according to gasbuddy.com). To put that in perspective, Ford’s overblown promise to deliver a 4.4-cent reduction was dwarfed by the real-world plunge in gas prices of 39.2 cents a litre during that period.


Now he's spending $30 million dollars to fight the federal carbon tax. It's abundantly clear that Ford  -- the businessman -- knows nothing about international markets:

The bigger point, which puts the lie to Ford’s misplaced hype over the past year, is that global market forces matter more than a premier’s force of will.


When people discover they've been conned, they usually run the con man out of town

Image: The Toronto Star
Posted by Owen Gray at 8:46 am