If He Can't Live In the House 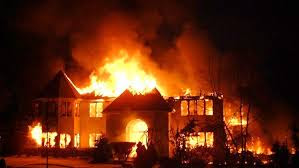 The Biden transition has now officially begun. Still, last night, Donald Trump tweeted that he would "never concede." What he will do, Paul Krugman writes, is trash the nation on his way out the back door. That is clearly evident in Treasury Secretary Steve Mnuchin's decision to take back money in government aid programs which has not yet been spent:

For a few weeks in March and April, as investors panicked over the pandemic, America teetered on the edge of a major financial crisis. But the Fed, backstopped by the Treasury, stepped up with new programs offering to buy assets like corporate bonds and municipal debt. In the end, not much of the money was used — but the assurance that the money was there if needed stabilized the markets, and the crisis faded away.

Maybe the new coronavirus surge won’t provoke a second financial crisis — after all, we now know that a vaccine is on the way. But the risk of crisis hasn’t gone away, and it’s just foolish to take away the tools we might need to fight such a crisis.

Mnuchin’s claim that the money is no longer needed makes no sense, and it’s not clear whether his successor will be easily able to undo his actions. Given everything else that’s happening, it’s hard to see Mnuchin’s move as anything but an act of vandalism, an attempt to increase the odds of disaster under Trump’s successor.

Trump's motivation is clear. He intends to punish the clear majority of voters who didn't cast their votes for him. If he can't live in the house, he intends to burn it down -- and Steve Mnuchin is setting the fire.

Email ThisBlogThis!Share to TwitterShare to FacebookShare to Pinterest
Labels: Trump's Trashing The Nation

Perhaps nothing speaks to the Trump scorched-earth vandalism better than the grifter's abandonment of America's "Open Skies" programme with its European allies. This involves two, highly modified military versions of the 707 that provided surveillance of the goings on in the Russian side. Trump not only rescinded the deal, he ordered that both aircraft be destroyed, sort of like Diefenbaker putting every Avro Arrow to the torch. I suppose he might carve his initials into the Resolute desk before long. Meanwhile, work is proceeding on the inauguration platform on the north lawn of the White House. It's already roughed in. Every time he goes out the front door there it is, sparkling white, inescapable. Poor Biden is going to be busy removing the additional fences the closet Mussolini erected around Festung Trump. There are at least five, possibly six.

Surely, Putin has something on Trump, Mound. Perhaps -- someday -- we'll find out what it is.

Psychologists predicted this long ago. His narcissism ensures he will take out his rage on Biden's team and especially on the base and staff that "failed him." An abuser is most dangerous when what he wants is taken away. The best we can hope for is that Trump permanently damages the GOP.

If there's any justice, Cap, the GOP will go down with him.

"Surely Putin must have something on Trump"

Honest to goodness, apparently nothing will shake the resolve of those who believe there's a Red under every bed, and Hillary wuz robbed by the nefarious Putin

It's the standard Canadian Progressive stance, unfazed by other well-researched opinion to the contrary. It seems as embedded and unthoughtful as the right's denial of climate change, and just as silly.

I admit that it's possible Trump is simply ignorant of who Putin is, BM. He's clueless in so many ways. Still, it's hard to believe that, on the subject of Putin, Trump could be so ill informed.

Maybe the new coronavirus surge won’t provoke a second financial crisis — after all, we now know that a vaccine is on the way.

I think Krugman is a bit optimistic. A general roll-out of a vaccine is probably 6 to 10 months away and the second surge is here now especially in the US with massive movements of people over the US Thanksgiving.

All those people traveling for Thanksgiving is a testament to the myopia of human nature, jrk. Things will get much worse before they get better.