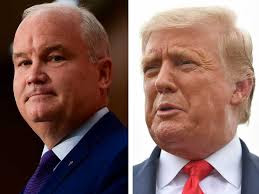 Erin O'Toole is trying to put a softer face on the Conservative Party, assuming that strategy will build a big tent party. But, Bob Hepburn writes, he's casting himself as Canada's Donald Trump:

Some analysts suggest O’Toole is shifting the party so far to the left that at times he sounds like U.S. Democratic presidential candidate Bernie Sanders or that he’s trying to steal traditional NDP voters.

In truth, though, what O’Toole is doing is fashioning himself as Canada’s Donald Trump — but without the bombast, lies, bigotry and polarization that mark Trump’s presidency.

In doing so he is trying to duplicate Trump’s successful strategy of building a polarizing populist coalition of traditional Republicans and disaffected voters, reaching out to people who were furious with “cancel culture” and “the radical left,” revved up by “grievance politics” and fed up with “elites” who they believe don’t give a damn about them, their families, their jobs or their very existence.

First, O’Toole’s leadership campaign slogan of “Take Back Canada” is an echo of Trump’s slogan of “Make America Great Again.” Catchy? For sure! But one can easily ask, “Take back from what — or whom?”

Second, O’Toole is pushing a “Canada First” economic strategy, with hints of trade tariffs on imports and action against companies that move jobs out of the country. Asked recently how this differs from Trump’s “America First” strategy, the Tory leader replied: “It’s not different at all.”

Third, Trump made huge headway in reaching disaffected voters by demonizing elites. That’s exactly what O’Toole has started to do with attacks on “elites” in business, politics and the media, although the truth is the Conservatives are the party of business “elites” and many media “elites.”

Fourth, like Trump, O’Toole has openly courted social conservatives with such moves as signalling a willingness to allow his MPs to reopen moral issues, such as abortion. Some pundits dismiss the political influence of social conservatives, but they remain a powerful force, well organized and well financed.

Fifth, O’Toole has adopted Trump’s get-tough approach to China, bashing it for cybertheft, human rights violations and aggressive trade stands. O’Toole doesn’t refer to COVID-19 as the “China virus” as Trump does, but he does echo the U.S. president when he alleges there is “no greater threat to Canada’s interest than the rise of China.”

Sixth, again like Trump, O’Toole is vigorously courting union workers, saying in a recent speech there is “too much power in the hands of corporate and financial elites who have been only too happy to outsources jobs abroad.” He’s also reaching out to suburban voters, saying in the same speech that “middle class Canada has been betrayed by the elites, on every level: political elites, financial elites, cultural elites.”

You'd think that after four years of Trumpian chaos, Canadian Conservatives would be wise enough to not repeat The Moron-in-Chief's mistakes. Apparently, we have our own morons.

O'Toole is not wrong when he accuses business and political elites of making life worse for the average Canadian. The trouble is that for ten years he was part of a government that actively promoted the interests of those elites through tax cuts, subsidies and privatization schemes.

In fact, there's no reason to believe that O'Toole's changed his views on the subject. If he had, he and his party would have voted this week in favour of an NDP motion to set a 1% tax on wealth over $20 million. Polling indicates that such a tax is supported by over 3/4 of Canadians, including 7/10 Conservatives.

Fortunately for Canada's ultra-wealthy, the Libs, Cons and Bloc ganged up to resoundingly defeat the motion. As long as we have a Parliament in which 90% of MPs vote against policies supported by 76% of Canadians, I don't think we can call ourselves a representative democracy.

The result of that vote is a clear indication of who owns our politicians, Cap.

How much assistance, including money, is O'Toole getting from south of the Medicine Line? Of course, Stephen Harper is still pulling strings and the CPC has allies in the GOP. Has there been any tell-tales of direct manipulation?

Harper had connections to Sheldon Adelson, the casino owner who funded Republican campaigns, Toby. I suspect those connections have not been severed.

So my high school suspicion that it is all a scripted, rigged charade and no matter how much you write or analyze or work it is all predetermined by those "others".
There that should outrage all those who "made it on their own thru hard work" right after they were born into it
except those three "self made poster children that i am sure you will list here that stood on the right corner to get hit by the money truck.
ha ha the conspiracy theories aren't theories anymore are they ?

Suspicion runs rampant these days, lungta -- and it's deadly to the public health.

When OTool first began his attack on the Canadian System , it sounded like Trump all over again. Anyong

As Hepburn writes, Anyong, it was right out of Trump's playbook.