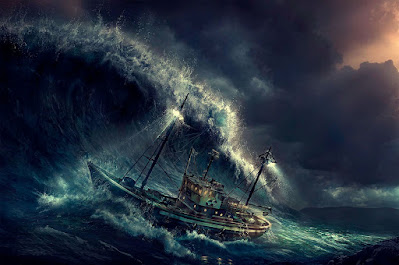 Yesterday, Ontario premier Doug Ford issued a stay at home order. But Bruce Arthur writes that it's too little, too late:

Tuesday, Ontario’s scientific modelling painted a picture of COVID-19 catastrophe — of an unfolding long-term-care home massacre, of hospitals that run out of room, of a virus variant that could set everything on fire — and an hour later the premier walked out and said the system was on the brink of collapse. And all that was true.

And then Doug Ford issued an incomplete stay-at-home order that he said took five hours of cabinet debate to decide on, which sounds so absurd that it should have been livestreamed so the world could see. Faced with calamity, and in fact past a reasonable point of calamity, this government is staying true to itself: it is still choosing primarily to protect those who can protect themselves. And it’s giving itself someone to blame.

“The success of these measures will ultimately depend on you,” said Ford. “It will depend on each one of you. Because without all of us rowing in the same direction, this thing could get much worse. Just look at what’s happening in countries where the U.K. variant has taken hold. It’s a total disaster. And we’ve been told by officials it’s not a matter of if this new strain takes hold. It’s a matter of when it takes hold, and how wide it spreads.

Ford's government can't bring itself to do what must be done:

They just can’t bring themselves to truly lock it down, and take care of everyone they can. The stay-at-home order was so vague that the government gave conflicting details — you can go to your cottage, or you can’t — and legal parameters won’t be published until Wednesday. Schools in Toronto, Peel, York, Windsor-Essex and Hamilton will be closed until Feb. 11 — and it’s hard to say that they’ll reopen then — but daycare centres won’t close at all. Outdoor gatherings are down to five, as if that was the problem.

The province promises a blitz on big-box stores with too many people in them, a few weeks after encouraging shoppers to cram the non-lockdown malls. We are told to only leave our homes for essential trips, but also, non-essential retail stores have different hours now. And despite their non-essential nature, many aren’t closed.

And resolutely, Ontario once again eschewed paid sick leave for the much-infected working poor, which has been asked for by public health, by mayors, by the associate medical officer of health in the morning modelling press conference. Dr. Steini Brown, the rock-solid head of the province’s science table and dean of the Dalla Lana School of Public Heath at the University of Toronto, said any plan to truly reduce the virus would not work without it. It has been explained to the province that the federal paid sick leave benefit is clunky and insufficient.

When push comes to shove, Ford remains true to his core belief. Business takes primacy. And some thirty per cent of us refuse to follow public health directives. It's a perfect storm -- which allows the virus to spread.

Back in March and April, when we really did shut down, the roads, highways and TTC were almost empty. I don't see that now. I see the usual rush-hour traffic jams, which means people are going to work and facilitating spread in offices, warehouses and factories.

The new guidelines say that people who can work from home should. I thought that was already obvious, but the change does nothing for factory and warehouse workers. As Arthur points out, these workers typically can't take paid sick days thanks to Ford's repeal of the law that mandated them.

Ford and his bumbling sidekick Dr. Williams have made a complete bollocks of Ontario's Covid response. We're not going to make headway unless all sick people can afford to stay home. Ford's pandemic response is class based. He orders office workers to stay home and protect themselves. Meanwhile, manual workers are forced to work in unsafe conditions for the benefit and convenience of those who can work from home. This is not fair and does nothing to prevent the spread of disease. No wonder projections are showing 8,000 new daily cases in the province in February.

I agree, Cap. Ford's response is class-based. It reflects the neo-liberal dogma that appears to be in Ford's DNA.

It seems that Ontario's problem is as much political as it is viral, Owen. Rightwing politicians from BoJo to Florida's DeSantis, Trump, and Kenney to Ford are putting tens of thousands of people into the ground unnecessarily. They exploit human rights as a ruse to avoid measures that impact the economy. They're gambling everything on vaccines that will never be the magic wand they imagine.

Absent recall legislation, some referendum that could force new elections to be called, how can the people of any province, state or nation hope to get out from under political dereliction/incompetence?

These folks are working from a playbook that the pandemic has made obsolete, Mound. But they don't see that.

Covid 19 vaccines are not the panacea hoped for by those that cannot wait to go back to 'normal'.
With new strains of Covid appearing and questionable efficacy of the vaccines that have been released via emergency measures not long term testing.
We do not yet know if a vaccine will or not stop us carrying the virus and infecting others.

Also disturbing is that many particularly in the US will refuse to take the vaccination many of them in the health care sector.
Until we reach a point where every street in the country has some dead of Covid I doubt the seriousness will sink in and ten of thousands more will die.
" It's the economy stupid" has met it's day!!

Indeed, TB. That old gem is was always too simple. Now it simply illustrates a gross form of tunnel vision.