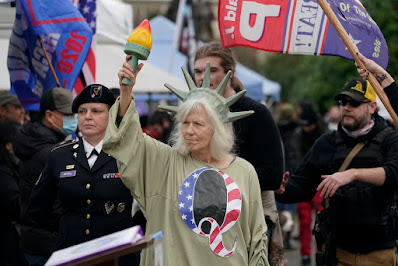 Paul Krugman writes that what happened in Washington last week has been a long time coming. It began when the GOP started coddling the crazies:

This coddling of the crazies was, at first, almost entirely cynical. When the G.O.P. began moving right in the 1970s its true agenda was mainly economic — what its leaders wanted, above all, were business deregulation and tax cuts for the rich. But the party needed more than plutocracy to win elections, so it began courting working-class whites with what amounted to thinly disguised racist appeals.

Not incidentally, white supremacy has always been sustained in large part through voter suppression. So it shouldn’t be surprising to see right-wingers howling about a rigged election — after all, rigging elections is what their side is accustomed to doing. And it’s not clear to what extent they actually believe that this election was rigged, as opposed to being enraged that this time the usual vote-rigging didn’t work.

But it’s not just about race. Since Ronald Reagan, the G.O.P. has been closely tied to the hard-line Christian right. Anyone shocked by the prevalence of insane conspiracy theories in 2020 should look back to “The New World Order,” published by Reagan ally Pat Robertson in 1991, which saw America menaced by an international cabal of Jewish bankers, Freemasons and occultists. Or they should check out a 1994 video promoted by Jerry Falwell Sr. called “The Clinton Chronicles,” which portrayed Bill Clinton as a drug smuggler and serial killer.

Over the years, those on the fringe of the party became its centre:

For a long time Republican elites imagined that they could exploit racism and conspiracy theorizing while remaining focused on a plutocratic agenda. But with the rise first of the Tea Party, then of Donald Trump, the cynics found that the crazies were actually in control, and that they wanted to destroy democracy, not cut tax rates on capital gains.

Now the Republican party is in their thrall. And it can't be redeemed.

Email ThisBlogThis!Share to TwitterShare to FacebookShare to Pinterest
Labels: The Death Of The Republican Party

It could also be said that Nixon's Southern Strategy gave Republicans the nuts in both parties. Before Nixon, the Dems had to keep a lid on the racist (often evangelical) whites, while the GOP had to tamp down the rabidly anti-communist (often anti-Semitic) Birchers. The Southern Strategy gave the GOP all the crazies who wove their conspiracy theories into ever more outlandish tapestries, culminating with QAnon. In the end, the plutocrats themselves got high on the crazy supply. Now, as you say, the party is irredeemable.

There's a lesson here, Cap: Organizations are usually destroyed from within.


Voltaire captured the essence of Donald Trump when he warned that "Those who can make you believe absurdities can make you commit atrocities."

There is now a significant portion of the American people who, over the past four decades, have been groomed to believe absurdities. Like religious zealots they can with the ease that comes from repetition accept absurdity as fact.

Without a shred of evidence these people were led to believe in massive voter fraud, that their democracy, even the Constitution itself, was in peril. These were people who already believed that the Dems trafficked in children.

The belief based, fact free world clashes with the fact and reality-based population. A nation divided against itself. We saw in Charlottesville, the Michigan state house occupation, rallies and protests too numerous to count, and in the assault on the Capitol that the lunatic contingent harbours a cadre of heavily armed terrorists ready to resort to violence. What's next, the evolution of an insurgency? How do you get this genie back into its bottle?

Good question, Mound. In the past, the genie has been sent back into its cavern after a bloodbath.

This past Friday reminded me of tGermany in 1933 or I ought to say the history of 1933. Anyong

There are strong parallels, Anyong. As Twain wrote, "History doesn't repeat itself. But sometimes it rhymes."