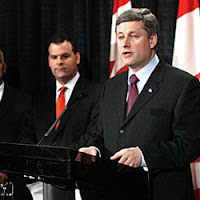 Stephen Harper's second attempt at cabinet making was an interesting exercise. Give the man marks for shrewdness. Perhaps cunning is the more appropriate word. Certainly, those who write him off as being politically dense do themselves and the country a disservice. But the distance between politics and policy can sometimes be a chasm.

Harper's removal of Rona Ambrose from the environment portfolio was no surprise. But, in fairness, the problem was not so much Ambrose as it was Harper's Clean Air Act, which was nothing more than a lot of hot (and dirty) air.

The appointment of John Baird was -- politically -- a masterstroke. If the old adage about the best defence being a good offence is true, then Harper put the right man in the job. First in Ontario and then in Ottawa, Baird has proved himself an able parliamentarian. And he has the political smarts to deal with his critics. The problem is that his critics are right. A government which, despite its brand, is really libertarian is philosophically ill equipped to deal with the problem of global warming.

Conservatism, as practised in North America in the later part of the last century and the beginning of the new one, takes its philosophical bearings from people like Friedrich Hayek and Leo Strauss, refugees from European Fascism and Communism. While they considered themselves classic liberals --Hayek applied the term to himself -- they were really libertarians, as Hayek's fellow faculty member at the University of Chicago, Milton Friedman, aptly described their guiding principles.

Believing that individual self interest and the operation of free markets are the best tools to solve political problems, they disparaged collective action as hopelessly confused and ultimately ineffective. In practise their influence has meant the dismantling of several instruments whose purpose has been to increase global security and stability, starting with the United Nations and its various agencies.

Harper has bought into this school of thought; and, besides Harper, its best salesmen have been Harper's Finance Minister, Jim Flaherty, and his former Minister at Treasury Board -- John Baird. And therein lies the problem. A libertarian government finds it very hard to think in global terms. All solutions are ultimately a matter of individual choice. So, for instance, Mr. Harper has said that the Kyoto treaty is not the appropriate instrument for dealing with the problem of global warming; and to justify Canada's not meeting its Kyoto targets, he asserts that individual Canadians would not agree to heat their homes "one third less of the time."

What he fails to mention, however, is that only twenty-five percent of carbon dioxide emissions come from individuals. The other seventy-five percent comes from industry and government operated power plants.

And it is here that the powers that be need to be confronted. Instead of using government to encourage research, to mandate fuel and emission standards -- and the tax system to provide incentives for green policies -- Harper and his allies are focused on reducing government influence in the lives of Canadians. If these "conservatives" were in office during the Great Depression we would still be there.

What the Great Depression and the Second World War taught us is that some problems are so large that only government action -- and sometimes international cooperation -- can solve them. The environmental crisis is -- in its scope -- similar to the Great Depression. Canadians understand that. The Liberals, when they elected Stephane Dion to lead the party, signaled that they understand that.

Harper's appointment of Baird indicates that he understands where his weaknesses are. Whether or not he knows how to develop policies to deal with the most important challenge we face remains to be seen.
Posted by Owen Gray at 8:59 am