The Best Leaders Money Can Buy 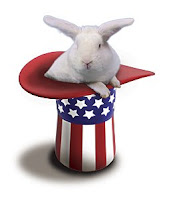 This past Monday, statistics on how much the major American presidential candidates have raised in the first three months of the year were released to the public. It was not surprising that Hilary Clinton led the pack. What was surprising was how much money she had raised -- some $26 million. Mitt Romney led Republican candidates with almost $23 million; Rudy Giuliani has $15 million in the bank; and John Edwards, another Democrat, has raised some $14 million.

And, lest Canadians think that we are somehow free of such electoral corruption, it is worth remembering that Howard Dean was invited to last year's Liberal convention in Montreal to offer advice to the party faithful on how to win the next election. And earlier last year, the Liberals' provincial cousins invited James Carville to their annual retreat to show them how to navigate the road to victory in the election which we will face shortly in Ontario.

And it is not just the Liberals who have sought the advice of American political consultants. Carville's influence is being felt in both of Canada's major parties. Coincidentally on Monday, The Globe and Mail and Canadian Press ran stories about the new War Room -- a Carville innovation -- which the Tories have set up in suburban Ottawa. The new facility, which has been leased until January 2008, consists of 17,000 square feet. It includes a television studio to produce political propaganda; and it contains 100 new desks with new computers atop each one. After the facilities tour, staged for members of the national media, Environment Minister John Baird and Industry Minister Maxime Bernier ran the latest attack ad against Stephane Dion, which airs this week in Quebec.

Keep in mind that no election has been called. In fact, Baird says that he "sincerely" hopes that there will be no election for awhile. But, he says, that decision is in Mr. Dion's hands. Of course, given last week's vote on the budget, Baird's statement is patently false. That decision rests in Mr. Duceppe's hands.

Which begs the question, what if those funds -- and all that energy -- were directed toward policy rather than politics?

Politics is about means. Policy is about ends. Clearly, someone has confused means and ends. There used to be an axiom about the moral quagmire to which such confusion leads. One suspects that the people behind the war room operate on the assumption that the public is stupid. If they are correct, we are in deep trouble. However, as the last federal election -- the one which gave the Tories a minority government -- proved, the Canadian public generally knows exactly what it is doing. It's the party in power which cannot --or will not --draw the distinction between means and ends.
Posted by Owen Gray at 3:22 pm