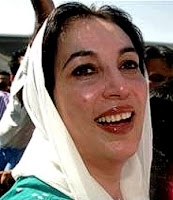 The assassination last week of Benazir Bhutto is a reminder that, as much as many of us would prefer democracy to any other kind of rule, there are certain prerequisites on which any democratic state must be founded. In many parts of the world, those prerequisites do not exist; or they are actively being undermined. And the first -- and most important -- prerequisite is the rule of law. All democracies are governments of laws, not men.

Whatever her faults, Bhutto was a democrat. David Ignatius, writing this past Friday in The Washington Post, remembered encountering her when they were both undergraduates at Harvard: "We had no idea she was Pakistani political royalty. She was too busy jumping into her future to make a show of her past." He recalled crossing her path a few years later at Oxford, where she was president of the Oxford Union debating society: "She was wearing a Rolling Stones T-Shirt, the one with the sassy tongue sticking out, and I recall thinking that Pakistani politics would never be the same once she returned home." On that score, Ignatius was right. Elected to -- and deposed from -- the Prime Ministership of her country twice, her life and times were tumultuous.

The tumult continues; and it is impossible to predict how the saga will play out. Haroon Siddiqui has written in The Toronto Star that "the crisis has two faces -- one as seen by most Pakistanis and the other as seen by the United States and, by extension the rest of the West, including Canada. Most Pakistanis view the U.S.-Pakistan relationship as an unholy alliance, with [Pervez ] Musharraff doing America's bidding, which is partly why he is unpopular. And Pakistan's democrats deeply resent Washington's choice of a military man as its instrument."

In North America, says Siddiqui, "Bhutto was portrayed as 'Pakistan's last great hope' in the headline of one magazine. But most Pakistanis did not share that perception." Her party is a family business -- her son has been appointed her successor -- and, as Ignatius admits, " the corruption charges that enveloped her second term as prime minister were all too real."

Still, whatever her failings, she stood for the rule of law -- which meant that, ultimately, she agreed to play by the rules. No democracy can exist unless its citizens abide by that agreement. It is only that agreement which keeps the tribes from each other's throats. In the name of safety, several governments -- including our own -- have sought to overlook or short circuit the rules. No one can predict what will come next in Pakistan. But unless and until the rule of law can be re-established, the safety of every Pakistani is at stake. That is a lesson which also applies to those of us who are thousands of miles away in North America.
Posted by Owen Gray at 11:55 am

Email ThisBlogThis!Share to TwitterShare to FacebookShare to Pinterest
Labels: The Death of Benazir Bhutto