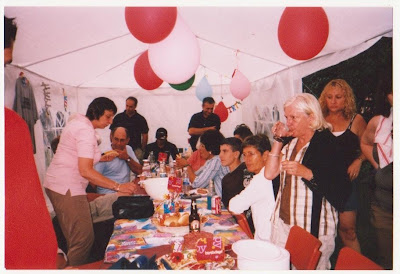 Summer is a time for family reunions. This is particularly true in Canada where, anytime from November to April, a snow storm can bring the major thoroughfares to a halt. For those of us who live on the shores of the Great Lakes -- where what we call "lake effect" can bury a town and leave the hamlet down the road untouched -- this phenomenon is a daily fact of life.

During the last two weeks, we attended two family reunions -- one for my wife's family, and one for mine. There are five of us: we have three children. But at the two events there were, at last count, fifty-six attendees. At one level, the turn-out served as an example of what economists call "exponential growth." At the very least, it served as testimony to the importance of procreation. 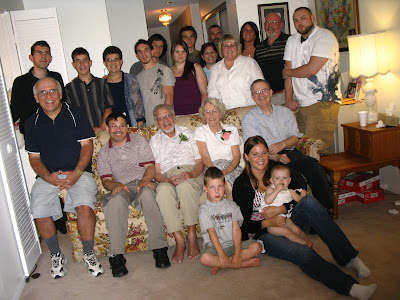 But the context was as important as the numbers. At the first event, we found ourselves caught in a deluge -- the summer rendition of lake effect. The organizers, however, had taken the trouble to rent a tent; and, somehow, there was room under it for all thirty-five of us. At the second event, we managed to cram twenty-one people -- grandparents, children, spouses, grandchildren and great grandchildren -- into one small apartment.

The logistics of getting all of these people under one roof were not easily accomplished. While most of us live in the triangle between Montreal, Ottawa and Toronto, both sides of the family have Western branches. My wife and I have relatives in Calgary; and my sister and her children live just outside Los Angeles. Add to that grown children who are on their own -- our son, for instance, has just returned from South Korea -- and, not to put too fine a point on it, getting everyone -- or almost everyone -- there was a considerable accomplishment.

For some, family is a thicket of dark motives and broken promises. But, in the end, every family represents the triumph of hope over experience. When an extended family overcomes the barriers of space, time and background to come together under the sky or someone's roof, the event reminds us all that, like it or not -- regardless of skin colour, religious affiliation or ethnicity -- we are all part of the family of man. That is the indissoluble bond which ties us together. When the weather gets nasty -- or when the planet gets crowded and the logistics get difficult -- the number of people who can gather under one roof is truly remarkable. And, as my Irish grandmother -- a widow who raised six kids in the midst of the Great Depression -- used to say, "There's always room for one more."
Posted by Owen Gray at 8:14 am

This reminds me of how lucky I am to even have a family. Nice post ...

I'll be following your work.

Yes, on the days when we wish to fly the coop, it's worth remembering that the coop is also a source of strength and renewal. Thanks for stopping by.

Owie: Followed your Dad's directions to the site and with a little effort managed to avoid the clothing section(Northern Reflections). Enjoyed the pictures and look forward to reading your thoughts.
Hope all is well.

The retail chain gets a lot more attention than this blog, Norm. But, as you can see from the map, it has a few readers.

The reunion meant a lot to my parents. As my father said, "In 1947, there were only two of us." They are proud of what they have wrought.