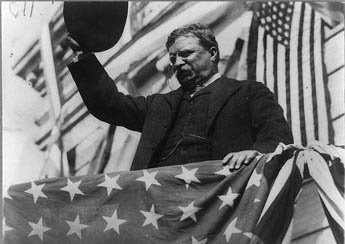 The period immediately following the American Civil War is generally referred to as The Gilded Age, a term originally coined by Mark Twain and Charles Dudley Warner. It was followed by what historians refer to as The Progressive Era, in which governors, like Wisconsin's Robert La Follette and presidents like Teddy Roosevelt and Woodrow Wilson, crafted public policies in reaction to the unmitigated greed and conspicuous consumption of the previous period. It took some time, but Canada also hopped on the progressive bandwagon, when a coalition of Ontario and prairie farmers formed the Progressive Party, which eventually merged with the old Conservative Party of Canada.

Progressive programs were similar in both countries. Their general purpose was to wrestle political control from the elites, who held the reigns of power, and to transfer them to ordinary citizens. Thus, progressives advocated workers rights, social justice, gender equality and public safety. These goals were to be achieved by legislation allowing workers to form unions, establishing a progressive income tax, allowing women the right to vote, guaranteeing food and consumer protection, and breaking up large corporate conglomerates -- like John D. Rockerfeller's Standard Oil-- which Teddy Roosevelt called "malefactors of great wealth."

We now take these programs for granted, even as they have been eviscerated during the last thirty years. As capital has become more mobile, power has shifted from workers to employers; income tax cuts have been structured to favour the wealthy; companies have become too big to fail; and, as the recent listeriosis outbreak in Canada illustrates, safety inspections are now the business of the companies which produce goods and services, instead of the government. All of this was done, as Alan Greenspan testified last week, on the assumption that self interest would prevent people from making stupid decisions.

Greenspan now admits that his view of the world and its inhabitants was "flawed" -- and the word "progressive" is returning to the political lexicon. Supporters of Barack Obama like to refer to themselves as progressives; and, in this country, Sinclair Stevens -- the former minister of finance in Joe Clark's government -- leads a group which calls itself The Progressive Canadian Party. In the last election, the party's target wasn't the Liberals or the NDP. It aimed its advertising -- limited as it was -- at Stephen Harper's Conservatives. Stevens himself was, like Clark, a member of the Progressive Conservative Party of Canada. The word "progressive" was dropped from the party brand when Harper was elected leader. Given the policies the Harperites stand for, the word's disappearance was no mere oversight.

And now David Brooks, in last Saturday's New York Times, writes that, in American political history, there is "a third tendency which floats between" Liberalism and Conservatism. This third option -- which Brooks claims is rooted in the thought of Alexander Hamilton -- "is for using limited but energetic government to enhance social mobility." Brooks traces Hamilton's philosophy through Lincoln's Land Grant College Act, which established the state university system, to the Homestead Act, which gave farmers free land in the West -- if they agreed to develop it -- to Teddy Roosevelt's trust busting.

What is interesting is that Brooks calls this train of thought "progressive conservatism." Perhaps he is simply returning to his Canadian roots -- he was, after all, born in Toronto. But, more importantly, Brooks writes that some conservatives had hoped that John McCain (who calls Teddy Roosevelt his political hero) would reform the Republican Party and reestablish the party of Lincoln and Roosevelt. Instead, he threw in his lot with the party of Nixon, which rose to power on a tide of resentment and a southern strategy aimed directly at the supporters of Strom Thurmond, George Wallace and Jesse Helms.

That party, says Brooks, is doomed. McCain's choice of Sarah Palin who "represents the old resentments and the narrow appeal of conventional Republicanism" is a sure sign that the party is "ailing" and "behind the times." No one should mourn its demise.

If the American historian Arthur Schlesinger is right in his assertion that history runs in cycles, we are due for a Progressive Revival. It cannot come too soon.
Posted by Owen Gray at 7:25 am

Email ThisBlogThis!Share to TwitterShare to FacebookShare to Pinterest
Labels: The New Progressive Era