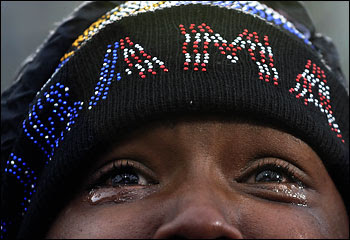 The picture has a special meaning for me. It was shot by a photographer who was aboard the train which brought Barack Obama and Joe Biden to Washington. It speaks to what will happen on Tuesday; but it also speaks to something I never thought would happen.

Forty years ago, about two months after graduating from university in Montreal, my father and I hopped in the family car and headed for North Carolina, where -- through a serendipitous congruence of events -- I found myself attending the University of North Carolina.

At the end of the first leg of our trip, we stopped in Washington, D.C. I had never been there; but I looked forward to visiting the Smithsonian, the Lincoln Memorial and the Kennedy grave site. What struck me most, however, as we travelled around the city, were the extremes -- white Greek temples and row upon row of slum houses. The contrasts were so glaring, I wondered how people could tolerate them.

I thought of that trip when I read Frank Rich's column in this morning's New York Times. Rich (who is a few years younger than me) grew up in Washington, "a sleepy Southern town of the Eisenhower era." -- which meant that it was a segregated city. "I wish I could say that we were outraged by this apartheid," Rich wrote. "But we were kids --privileged kids at that -- and out of sight was out of mind. Except as household help, black Washington was generally as invisible to us as it was to the tourists who were rigidly segregated from the real Washington while visiting its many ivory marble shrines to democratic ideals." That was why the gulf between rich and poor went unnoticed.

But, like me, Rich had read John Howard Griffin's Black Like Me; and he had watched Martin Luther King deliver his speech outside the Lincoln Memorial in August of 1963. And he knew that, despite the invisibility of the majority of Washington's citizens, things were changing. This became particularly apparent when King was assassinated in 1968. Washington erupted in blind fury; and mobs torched those slum dwellings.

Still, "looking back on my high school years," Rich wrote, "I'm struck by how slowly history can move. The civil rights legislation of the Johnson administration had been accomplished by 1964 and 1965, but by the time of my graduation [in 1967] the impact was minimal, even in the city where the laws were written and passed." That was true in Greensboro, North Carolina, where I taught high school in 1969, to pay for my education. I taught in a school where 1% of the student population was black. On the other side of town there was a high school where there was not a single white student.

It has been over 145 years since Lincoln signed the Emancipation Proclamation; and it has been just over 45 years since Lyndon Johnson signed the Civil Rights Act. But it is precisely because history has moved so slowly that next Tuesday is so significant -- and why the tears you see mean so much. Those tears represent both the pain of the past and the hope of the future.
Posted by Owen Gray at 9:08 am