Straight Out of Orwell 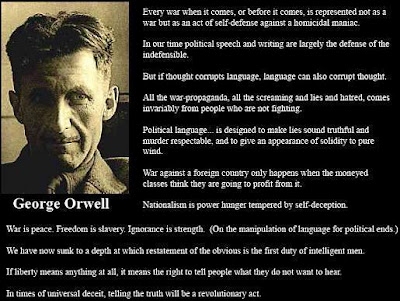 In an article in this month's Vanity Fair, Richard Clarke -- the former American Czar for terrorism -- describes a meeting which occured in the White House on the evening of September 11th. Recalling the meeting, Clarke reports Secretary of Defence Donald Rumsfeld's advice to George W. Bush: "And Rumsfeld said, You know, we've got to do Iraq, and everyone looked at him -- at least I looked at him and Powell looked at him -- like, What the hell are you talking about? And he said -- I'll never forget this -- There just aren't enough targets in Afghanistan. We need to bomb something else to prove that we're, you know, big and strong and not going to be pushed around by these kind of attacks."

From the very beginning the plan was to shift the war from Eurasia to Eastasia. And, as Frank Rich wrote in Sunday's New York Times, the Bush administration had its propaganda machine ginned up and ready to go. "The one indisputable talent of [Bush's] White House was its ability to create and sell propaganda both to the public and to the press. Now that bag of tricks is empty as well."

The propaganda may have lost its punch; but the machine is still spinning recent history. As Rich reports, a booklet can now be downloaded from the White House website, which trumpets Mr. Bush's accomplishments. But the booklet's reading of history is highly selective: "Bush kept America safe (provided his presidency began on September 12th, 2001). He gave America record economic growth (provided his presidency ended in December, 2007). He vanquished all the leading Queda terrorists (if you don't count the leaders bin Laden and al-Zawahri). He gave Afghanistan a thriving 'market economy' (if you count its skyrocketing opium trade) and a 'democratically elected president' (presiding over one of the world's most corrupt governments). He supported elections in Pakistan (after propping up Pervez Musharraf past the point of no return). He 'led the world in providing food aid and natural disaster relief' (if you leave out Brownie and Katrina)."

All politicians leave mixed records behind them. But what is striking, as Mr. Bush and Mr. Cheney leave office, is the refusal of either man to admit the possibility of error. When asked by Charles Gibson if the 2008 election was a repudiation of his administration, Bush answered, "it was a repudiation of Republicans."

All propaganda seeks to take credit (personally) and to assign blame (to someone else). Hence, as Orwell noted, one finds the ubiquitous use of the passive voice in sentences like, "Mistakes were made." Conveniently, of course, the sentence leaves no room for someone to take responsibility for those mistakes.

Clearly, as Mr. Rumsfeld suggested, the Iraq War was conceived as a demonstration project. However, when things go so catastrophically and so demonstrably wrong, one has two choices: Either one confronts the truth; or one seeks refuge in delusion. As Mr. Bush leaves office, he still clings to his delusions. Orwell would not have been surprised.
Posted by Owen Gray at 7:29 am