Of Trains and Automobiles 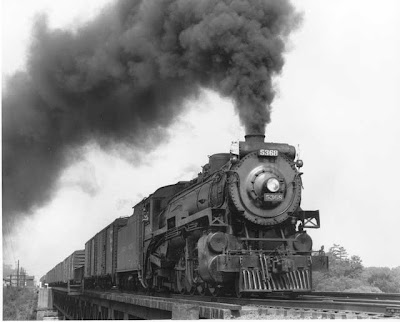 Outside the train station, in Belleville, Ontario, there is a plaque. It proclaims that the building was erected in 1841 -- more than 25 years before Canada officially proclaimed its existence in 1867. The nation was born in the 19th century, during the first attempt at globalized trade -- a period which roughly corresponded to the reign of Queen Victoria. One hundred and fifty years ago, railroads formed a loosely woven quilt which covered all of North America. They symbolized the riches produced by the Industrial Revolution; and they were the source of treasure for a few of the robber barons who bestrode the era.

Canada had three railroads: The Grand Trunk Railway -- which built the station in Belleville -- joined two countries, Canada and the United States. Most of the track was laid on Canadian soil; but the two terminuses were in Portland, Maine and Chicago, Illinois. The Canadian Northern Railway stretched from Quebec City to British Columbia, cutting a wide swath through Northern Ontario to Winnipeg, then heading northwest through Edmonton, and on to British Columbia. The most storied, and the longest of all -- The Canadian Pacific Railway -- stretched from coast to coast and symbolized the country's motto, "from sea to sea." Every small town in Canada had a station, or at least a grain elevator, and was connected to the main route by a branch line. In a large, sparsely populated country, railroads were the heart which pumped the nation's economic blood.

But when the world economy came apart -- in the aftermath of World War I -- railroads were in trouble. Canada never needed three railways. One century built too many railways. The next built too many automobiles. When the Grand Trunk and the Canadian Northern declared bankruptcy in the early 1920's, the Conservative government of Sir Robert Borden nationalized them, blending the two into one. The government dubbed the new entity the CNR -- Canadian National Railways. And, throughout the Depression, Canada was served by two railroads -- from sea to sea. 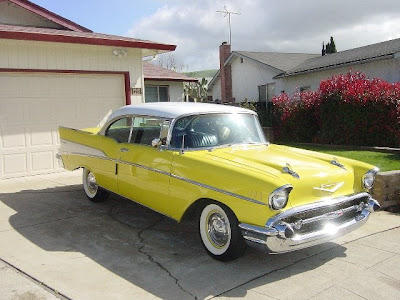 But after World War II, transportation shifted away from the railroads to the passenger car and the transport truck. In the United States, the Eisenhower administration built the Interstate Highway System; and, by the mid sixties, the Canadian government completed the Trans Canada Highway. Passenger service on both American and Canadian railroads dried up. Tracks were abandoned or "rationalized," with two or more railroads sharing the same tracks. And, on the Canadian prairies, trucks pulled up to the grain elevators which stood beside abandoned railroad tracks. The governments of both countries took charge of what passenger service remained -- in short busy corridors between New York and Washington or Quebec City and Windsor.

If railroads were the symbol of 19h century prosperity, the passenger car was the symbol of 20th century prosperity. And, as the second attempt to globalize trade has come to a standstill, the automobile -- like the steam locomotive before it -- is about to be metamorphosed. But, just as railroads did not totally disappear, automobiles -- and the companies which make them -- will not go the way of the dinosaur. We got a peek at the future last week, when auditors for General Motors -- which fifty years ago was the world's largest industrial corporation -- concluded that the company would have difficulty remaining "a going concern." The company which Walter Chrysler built -- a company once noted for state of the art engineering and innovation -- is about to go under.

As it did for the railways, government will have to become a major stakeholder in a radically transformed automobile industry -- an industry which will no longer be the economic engine of both Canada and the United States. There will be howls from market fundamentalists, who will claim that government should not stand in the way of what the economist Joseph Schumpeter called "creative destruction." But because cars and trucks -- like the railroads -- touch the lives of so many people, a smaller government supported transportation industry -- an industry which will include heavy investment in urban mass transit -- is just around the corner. It is a construct which has been adopted in the past -- and which is about to be adopted again.
Posted by Owen Gray at 7:29 am