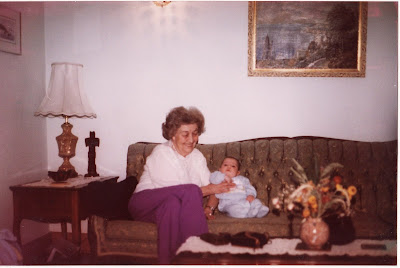 Mary Saunders died last week. Her name probably has little significance for readers of this space -- except for those who are members of my immediate family. She would be uncomfortable knowing that I mentioned her here. She did not seek the limelight.
But she needs to be remembered here because she touched so many lives. She was the dear friend of my wife's mother. They met each other when they discovered that their children attended the same elementary school. They also discovered that they shared a passion for bridge and parish bizarres. Most of all, they were each other's confidants.
When my mother-in-law died sixteen years ago, Mary stepped in and took her place, as grandmother to our three sons. The picture shows her in that role with our youngest son, who was three months old when it was taken. She sent the kids cards at Christmas and always slipped in money for presents. Most of all, my wife would call her frequently, as she had called her mother, to talk about their mutual activities.
When we returned to Montreal -- usually twice a year -- we would meet Mary at a local restaurant for lunch. The only times we ever disagreed were when it came to paying the tab. We eventually agreed that we would alternately pay the bill.
Mary spent her entire life in Montreal. Despite the political storms of the sixties and seventies, she and her husband Robert (who everyone called Nuffy) continued to live in the house they built at the end of World War II on the western side of the island. They raised two sons there: one who stayed in the city, and one -- who like so many of our generation -- headed down the road to other provinces and towns. She and Nuffy took great pride in their children and grandchildren. She was of that generation who stayed home and raised her children as a vocation. She was no shrinking violet, however. She could spot foolishness long before it arrived; and she could laugh appreciatively at human foibles.
When Nuffy died in the late eighties, she stayed put. She lived on her own, even as her knees made it increasingly difficult for her to walk. And, even though she did not go out regularly for errands, when she did go out, she drove herself to her destination.
The value of a human life is not measured by the money a person makes or the fame he or she achieves. It has everything to do with the intersection of that life with the lives of others -- and in what happens when those lives touch. In her nearly ninety years, Mary touched a lot of lives. All of us in this family were blessed because our paths crossed hers. We miss her terribly; and we still have a hard time getting our heads around the idea that we will no longer be able to meet her for lunch. But the good news is that -- as my sister-in-law reminded my wife -- her mother has her bridge partner back.
Posted by Owen Gray at 8:31 am