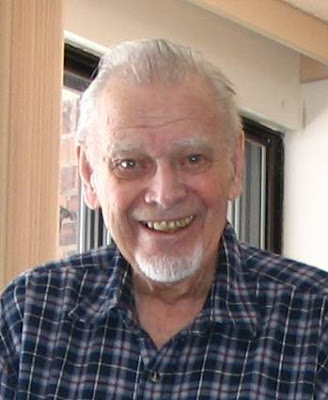 My father died last week. He lived a long life -- long enough to see his children grow up and have children of their own. In fact, he lived to see and enjoy two great grandchildren.

A year and a half ago, I marvelled in this space about how a man who grew up without a father managed to become such a good one himself. And I was immodestly pleased when he responded to that post publicly.

We no longer live in Montreal, where my wife and I grew up. But I try to call my parents every weekend; and my father always gave me his take on each Monday morning's post. You should understand that my father's political opinions -- on most subjects -- were far different than my own. Even though I bear his name, he was never out to convert me to his worldview.

In fact, one of the many lessons he taught me was that we could disagree -- profoundly -- but we did not have to fight. Perhaps he came to that conclusion as a World War II veteran. He certainly had no patience for war stories. He valued his friendships with other veterans; but he took no pride in someone else's total surrender. He refused to keep a gun in the house; and when -- as a kid -- I asked him why, he simply said, "I had enough of that during the war."

To say I will miss him doesn't capture the way I feel. But I am confident that he has earned his reward.
Posted by Owen Gray at 7:36 am

Owen,
I'm truly sorry for your loss. I lost my mother this year & Christmas just doesn't feel right this time. But it will change as time passes.

Your Dad sounds like he was a wonderful man & had his priorities right & that he loved his family first & was loved very much in return. My heart is with you.

I am sorry for your loss, terrible at any time, but somehow worse at this time of year.

You are blessed to have had such a good father.

Thank you both for your kind thoughts.

I've said more than once during the last week that death is an inconvenient truth.

What helps in confronting that truth is being able to look back at a life and to find that it was well spent.

I know you were very close and I'm sorry I missed the chance to meet your dad. I have heard much about him from you and Michael and his influence is obvious in both of you, so I know I would have loved him very much. We're thinking about you.
- Mel

The legacy of a man should not be judged by the size of the bank account he left behind or the number of buildings he owned. It lives on in the people whose lives he touched. Thank you, Melissa.

Thank you for your post about our Dad. Everything you have said about him is true. He was a humble man and he passed on the life lessons he learned to his family.

He is looking down on us right now, smiling.

Absolutely, Michael. And he knew that we could get by in his absence.