A Study in Hypocrisy 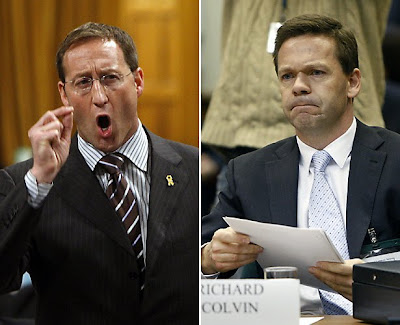 On Friday, Security Minister Stockwell Day articulated the reasons why the Harper government had refused to release uncensored documents to the Parliamentary Committee investigating Afghan prisoner abuse. "We are not going to make information available just readily," he said, "about friend and foe alike, about specific items, about a security operation that could imperil our own troops and imperil the citizens."

It's interesting to compare Day's statement to one that Stephen Harper made as he assumed office three years ago: "Restoring accountability will be one of the major priorities of our new government. Accountability is what ordinary Canadians, working Canadians, those people who pay their bills, pay their taxes, expect from their political leaders."

And then there was this trope on how a minority parliament should operate, from the then Leader of the Opposition: "And I think that the real problem we're facing already is that the government doesn't accept that it got a minority."

More importantly, there is the principle of the supremacy of Parliament. It is the fundamental check against a government's abuse of power. The simple truth is that we are dealing with two kinds of abuse here: abuse of prisoners and abuse of Parliament.

As Jeffrey Simpson pointed out in Saturday's Globe and Mail, there was a fairly straight forward way out of this mess. Harper inherited the war and the problem of what to do with prisoners from Paul Martin. The government could have made the following statement:

We heard Mr. Colvin's warnings and those from other sources. He was a fine public servant, but he had only one angle on the challenges he faced. We listened to his information and sought to cooberrate it because, after all, we were working in another country for which we had to show certain respect. When we gathered more information, we acted to upgrade our agreement with Afghan authorities.

Instead, the Harperites turned their guns on Mr. Colvin, as they had on Linda Keen before him. Then they brought out the generals to discredit Colvin -- until Natynczyk discredited the generals. Mr. Harper's government, like Richard Nixon's government, has taken on the personality of the man at the top. It displays a deep and bitter sense of paranoia.

The big problem with Simpson's suggestion is that the new, "upgraded" transfer agreement is simply not working.

The Globe has a story on how the current transfer agreement is failing. Seems we really don't know what's happening to those we turn over. What's more, CF troops are reporting that they capture the same enemy fighters again and again.

Like almost every other aspect of this story, those of us who were paying attention knew about this long ago.

Indulge me a moment, please. Here's the bulk of a blog post I wrote in March 2008.

60%-70% of prisoners handed over to Afghan authorities are only held only briefly before they are able to bribe their way out of jail. See:
http://www.newsweek.com/id/107576/page/1

Q: Why do we fail to follow up on detainees to make sure they do not pay $20 and go back to the Taliban front lines?

A: We are so afraid of confirming that we are in violation of international law that we look the other way while two crimes are committed: bribery and torture.

Q: Why have we given in to Afghan demands that we resume detainee transfers?

Many so-called Taliban who are delivered for bounty to NATO forces are not Taliban at all. Tribal and family rivalries routinely see Afghans kidnapped for ransom or turned over to NATO, then by NATO to Afghans. From there, the age old system of bribery, pay-offs and torture goes into effect.
*****

Detainees are released AFTER being tortured sufficiently enough to induce the detainees' relatives (or fellow Taliban) to cough up bribe money.

The failure of the detainee agreement is demonstrably putting out troops at unnecessary risk. Now. Not back in 2002-2006. Now.

I will concede that ensuring prisoners are treated humanely in Afghanistan is a hellishly difficult job. But, as you point out, we have known that for a long time; and it would appear that we have simply refused to accept responsibility for that task.

I think it goes to that notion of "punching above our weight." The GoC wants to mount a larger campaign than we can really afford.

Where, then, do we cut corners?

In the handling of scumbags and murderers with the hopes that nobody will notice. Oops. Too late. The Hague, here we come.

Thich Nhat Hanh, the Buddhist monks that Martin Luther King nominated for the Nobel Peace Prize, has written a remarkable book, The Art of Power. Try to make time to read it.

Think of Stephen Harper as you read this:

"If you strike out at others, they suffer, and they will strike back at you one way or another. If they cannot do it officially, they will do it unofficially.If they can't bring a bomb to an airplane, they will use bombs in other ways. Misuse of power is the primary cause of suffering for many of us. The way power is used is not just a matter of spirituality, it is a matter of life and death for a whole nation.

"Business and political leaders are powerful in our society. In many ways they determine our fate. We must find ways to help them use their power with wisdom. They are caught in suffering, fear, and anger, and without enough understanding and compassion, they can misuse their power. They proceed with decisions that the majority of people in their own country and around the world don't support. We shouldn't let them misuse for purposes of destruction the powers that we have entrusted to them. We can channel our wisdom and compassion to these political and business leaders, so a balance can be restored in them. Their spiritual power can act as a check on their political and economic power."

So following Thich Nhat Hanh's argument, our job then is to take a hollow man and using our compassion make him whole.

Think of Stephen Harper as your brother, because he is.

You have offered us a challenge for the New Year. It is hard to think of Stephen Harper as our brother.

But, if we do that, he might -- by some strange process of reverse psychology -- begin to think of Canadians as his brothers and sisters.

With that perspective, he also might understand that his purpose is not to vanquish his enemies, but to strengthen the ties which bind Canadians one to another.