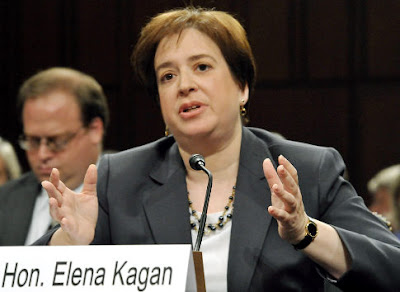 Republican senators reverted to speaking in code two weeks ago at Elena Kagan's confirmation hearing. Her nomination was suspect, they suggested, because she had clerked for Supreme Court Justice Thurgood Marshall. Senators Hatch and Coburn said that they "weren't sure they could have voted to confirm Marshall to the court;" and Senator Kyl suggested that Marshall advanced "the agenda of certain classes of litigants." Given the fact that Marshall argued successfully for the desegregation of public schools, it was pretty clear which "litigants" Kyl had in mind.

The hearing took place in the week Senator Robert Byrd, of West Virginia, died. Byrd had once been a member of the Ku Klux Klan and had written to Mississippi senator Theodore Bilbo that "I should die a thousand times, and see Old Glory trampled in the dirt never to rise again, than to see this beloved land of ours become degraded by race mongrels."

But, unlike Strom Thurmond -- who left the Democrats and joined the Republicans -- Byrd's thinking evolved over time. As Barack Obama revealed in The Audacity of Hope, Byrd knew that those words would follow him to his grave. "I only have one regret, you know," he told Obama. "The foolishness of youth." If anything, rather than evolving, the Republican Party has devolved.

Few now remember when one of the rare African Americans in Congress was a Republican from Massachusetts, Senator Edward Brooke. And fewer still remember when the man who filled President Obama's former Senate seat was a liberal Republican named Charles Percy. One wonders what they think about the transformation of their party. Indeed, one wonders what Abraham Lincoln, the first Republican president, would think of the modern Republican Party. If he had merely fallen asleep in April of 1865, and -- like Rip Van Winkle -- had awakened at the dawn of this new century, I suspect that his careworn face would become more haggard still.

As he traced the tragic arc of his party during the last one hundred and fifty years, he would find a kindred spirit in the governor of his neighbouring state of Wisconsin, Robert La Follette -- who was, as Jo Mari suggested in The American Radical -- "arguably the most important and recognized leader of the opposition to the growing dominance of corporations over Government." He would nod approvingly as Dwight Eisenhower declared, "Every gun that is made, every warship launched, every rocket fired, signifies in the final sense a theft from those who hunger and are not fed, those who are cold and are not clothed."

But his brow would darken as he watched Barry Goldwater carry the Party's standard in 1964. He would be infuriated by Watergate. And he would weep at the invasion of Iraq. He would conclude that his party was not ruled by its better angels, but by its darkest demons -- and that it was "full of sound and fury, signifying nothing." The man who signed The Emancipation Proclamation would look at at the Republican response to Kagan as a betrayal of everything the party stood for after the Civil War. And the man who wrote The Gettysburg Address would call out those who speak in code.

This entry is cross posted at The Moderate Voice.
Posted by Owen Gray at 7:44 am

Email ThisBlogThis!Share to TwitterShare to FacebookShare to Pinterest
Labels: The Kagan Confirmation Hearings

(this is my fourth try here - Google is not liking me today!)

Perhaps somebody is giving the Google folks a hard time since they settled their differences with China, Chris.

To borrow a phrase from Shakespeare, Google's course does not always "run smooth."