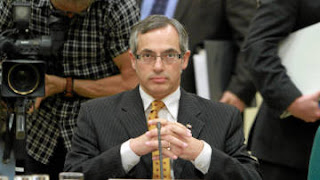 We now know how many Canadians complained about the long census form the last time it arrived on their doorsteps four years ago. Statistics Canada received a total of 166 complaints from the 12 million Canadians who received the survey. So, the Harper government says, it is simply responding to public pressure. Something doesn't add up.


And Stockwell Day says, "Do you think it is right that you can threaten your neighbour with jail time if she doesn't tell you if she has mental issues or not? Or who does what chores in the house? Or whether she is a Jew or not? Don't you find that one even a little bit chilling?" Apparently not. But remember this is the man who, as leader of the Reform Party, claimed that the St. Lawrence River flowed into the Great Lakes and not into the Gulf of St. Lawrence.

And then there is Vic Teows, who plans to spend $9.5 billion over the next five years to fight a rising tide of crime -- even though the latest data from Statistics Canada confirms, James Travers writes, "a decade long trend. Overall, there is 17 percent less crime now than in 1999. Better still, most offences are minor, and heinous, violent crime has fallen so far that it's now less than one quarter of one percent of the shrinking total."

One is tempted to conclude that stupidity has gone viral. But Paul Saurette is on to something when he says that the key to understanding what is going on can be found in Tom Flanagan's book, Harper's Team:

Winning elections and controlling the government as often as possible is the most effective way of shifting the public philosophy. Who would deny that Canada's present climate of opinion has been fostered by the Liberal Party's long term dominance of federal institutions? If you control the government, you choose judges, appoint the senior civil service, fund or de-fund advocacy groups, and do many other things that gradually influence the climate of opinion.

Following Joesph Goebbels strategy, the Harperites know that the most grandiose lies will be accepted as truth, if they are repeated often enough. But Goebbels did not have to do battle with Statistics Canada. And as long as Statistics Canada mines data which contradicts their public proclamations, the transformation the Conservatives seek will be beyond their reach.

Mr. Harper, Mr. Clement and their benchmates are no democrats. And they know exactly what they are doing.
Posted by Owen Gray at 5:23 pm

Email ThisBlogThis!Share to TwitterShare to FacebookShare to Pinterest
Labels: Dismantling Stats Can