It's Always Been About Jobs 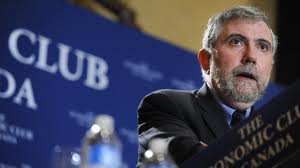 Many people criticize Paul Krugman for being too shrill. But, after all, the policy elites have chosen not to take his advice; and, as economies around the world continue to deteriorate, he has become increasingly frustrated. He writes this morning that:

In case you had any doubts, Thursday’s more than 500-point plunge in the Dow Jones industrial average and the drop in interest rates to near-record lows confirmed it: The economy isn’t recovering, and Washington has been worrying about the wrong things.


It is supremely ironic that the day after Washington finally agreed to cut spending -- which we were told would increase business confidence -- world markets plunged. Somebody has been selling snake oil; and it's not Krugman. His message has been simple: Confidence will increase when employment increases. And employment numbers keep heading south:

Consider one crucial measure, the ratio of employment to population. In June 2007, around 63 percent of adults were employed. In June 2009, the official end of the recession, that number was down to 59.4. As of June 2011, two years into the alleged recovery, the number was: 58.2.

These may sound like dry statistics, but they reflect a truly terrible reality. Not only are vast numbers of Americans unemployed or underemployed, for the first time since the Great Depression many American workers are facing the prospect of very-long-term — maybe permanent — unemployment. Among other things, the rise in long-term unemployment will reduce future government revenues, so we’re not even acting sensibly in purely fiscal terms. But, more important, it’s a human catastrophe.


If policy makers are smart, they will take Krugman's advice.That means using government resources to create jobs on public infrastructure. We were reminded again this week -- when a large slab of concrete fell onto Montreal's Ville Marie Expressway -- that the need for such programs is critical.

But, so far, nobody --  not President Obama, and certainly not Stephen Harper -- appears to be listening. Krugman is simply repeating what ordinary people have been repeating for three years:  Right now it's about jobs. It's not about debt.

The man has a right to be shrill.