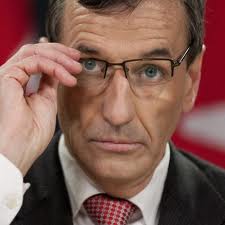 The Harper government rues the day it appointed Kevin Page to the office of Parliamentary Budget Officer. Today, it must also wish that Scott Vaughn had never been appointed Environment Commissioner. Both men have fearlessly reported on the central thread that runs through the present government -- fraud.

Yesterday, Vaughn reported that the government had no plan to cut greenhouse gas emissions. For the Harperites, environmental organizations are like unions: their concerns for justice and the future simply get in the way of doing business. And, therefore, the government spins fictions that have no relation to the facts. This is particularly true in the case of environmental regulation. Micheal Harris writes:

Of the pretty fictions and lurid grotesqueries that have come out of the Harper government, few can match its contempt for the environment. It is just one more subject for the PM’s wood-shed politics. Whether it’s auditing David Suzuki ad nauseam or characterizing environmentalists as radicals in the pay of foreign governments as Natural Resources minister Joe Oliver did, the environment for Harper is nothing but a troublesome obstacle to his corporate hero-worship and political unilateralism.

The Harper government set a target of reducing greenhouse gas emissions from 2005 levels by 17 percent as of 2020.  Citing Environment Canada’s own forecasts, Scott Vaughan reported that emissions will actually rise 7 percent above those 2005 levels by the target date.  It seems the only way to get the truth out of this crowd is to audit them.


Shakespeare suggested that the first thing a new regime should do is  get rid of the lawyers. With the Conservatives, the first people to be cashiered are the auditors. The Harperites tell us that they are concerned with costs. But the truth is they don't know -- and they're not interested -- in figuring out the costs -- or the savings -- of any of their policies

The Harper government did zero analysis to establish the cost to the economy of reducing greenhouse gas emissions by 17 percent.  On the face of it, that is rather strange.  In dumping Kyoto, a host of prime ministerial sock-puppets cited the burdensome costs, some $14 billion.  So why not tell us how much we are going to save?  Or as Scott Vaughan put it, “We therefore expected the government would have estimated how much it will cost to meet its target and [identify] the least costly options.”  It didn’t.


Contempt is the word that defines the Harper government. One continues to hope that, eventually, Canadians will treat these pretenders with the contempt they deserve.

This entry is cross posted at Eradicating Ecocide.
Posted by Owen Gray at 10:16 am

I would say the correct characterization of the Harper Government is contempt. It all is contempted of the Canadian people.

It seems to me that contempt is the right word, Philip. The have nothing but contempt for the other parties and for the citizens of Canada.

They assume that they're smarter than the people who gave them the keys to the car. And -- in the end -- that assumption will lead to their ddownfall.