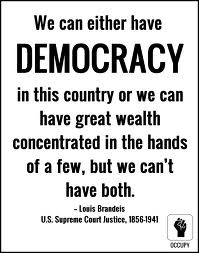 The American editor and essayist Lewis Lapham has delineated the three hallmarks of democracy. Michael Harris refers to them in a piece he wrote for ipolitics:

Lewis Lapham, author and twice editor of Harper’s Magazine in the United States, made the same point. Democracy, he wrote, announces itself in three fundamental ways: an honest public discussion about issues; accountability of the governors to the governed; and equal protection under the law.


By Lapham's yardstick, Canada is not a democracy -- "let alone a parliamentary democracy. It is an oligarchy with a few well chosen friends and millions upon millions of people to ignore, vilify or bamboozle."

Consider the matter of whether or not there is public discussion of government policy:

For several years, the Conservative government lied its brains out about the F-35 program. They lied about whether there had been a competition, about whether there was a contract, and most spectacularly, about how much these jet fighters would cost the poor saps who have to pay for them.

But contrition is for little people. Oligarchs never say they’re sorry. After being outed by the Parliamentary Budget Officer, by the auditor general and then by independent accounting firm KPMG, the prime minister told a national TV audience that the accounting firm’s report “validated” the government figures for the F-35, and that an “assumption was just made” that Canada would buy these aircraft. This, of course, is the stuff that makes the grass turn green.


And then there is the issue of accountability to the governed:

Jim Flaherty’s last budget, the Agatha Christie budget, brought down billions in cuts. But the mystery of what was cut — where, and by how much — endures. The lion’s share of federal departments haven’t responded to requests by Parliamentary Budget Officer Kevin Page for the precise nature of the Harper government’s slashing.

If opposition MPs and parliamentary officers don’t know the details, it is impossible to debate the cuts — which is, of course, pretty much the idea.


Finally, there is the question of equal justice before the law:

This is a very important question because as the Harper oligarchy suppresses the rights of the political opposition, unions, officers of parliament, environmentalists, scientists and aboriginals, it finds itself more and more before judges.

The PM’s view is that you win some, you lose some. Actually, he’s lost quite a few and will probably lose more in 2013 because of the alleged unconstitutionality of much of his justice legislation as contained in poorly-debated omnibus bills. And that is a universe the prime minister is comfortable in — the winner-take-all world of expensive court rulings and a grinding process — life as an elitist joust where he with the longest lance usually prevails.


Theresa Spence's hunger strike is an attempt to do what Canada's opposition parties have been unable to do -- replace oligarchy with democracy.

Email ThisBlogThis!Share to TwitterShare to FacebookShare to Pinterest
Labels: Democracy or Oligarchy

Thanks for this Owen, a short but accurate synopsis of our current situation and of Mr Harris's longer dissection.

We're faced with a stark choice, Rural. It's really sad that it's come to that.

I live for the day, Owen, when this terrible terrible government is thrown out of office, but I also realize that hope will not be realized until more people wake up to the kinds of truths contained in Harris's piece.

One of my most severe gagging days was, Harper declaring himself a Christian. Meanwhile, Chief Spence is starving for her people.

Oligarchy best describes a Dictator, such as Harper.

Trevor Harrison has the best description of Harper's oligarchy. When Harper was Policy Chief of his Northern Foundation Party, back in 1989. Harper was linked with Nazi intellectuals and Christian Fundamentalists.

Harper is every bit as hateful as, Stalin, Hitler and Mussolini. All of them are within, the same character typo and, the same personality traits. All of them, cheated to win their elections.

In Harper's Dictatorship government. There will be no Democracy. No Civil Rights and Liberties. Freedom of Speech will be taken from us. Our Human Rights are being eroded.

Harper is a monster, selling us out to a Communist country. BUT!! Harper is a Christian. He "prey's" everyday, so he says.

There are people in all parties, Lorne, except for Elizabeth May -- that party of one -- who would support oligarchy.

Sending Harper packing is the first step. But there are lots of other steps we need to take.

Your description of Harper's Christianity reminds me of what Mahatma Ghandi said, Anon.

Unfortunately, Owen, corporatism inevitably degrades into one form of oligarchy or another. Yet we have three main parties, by choice or cowardice, that have embraced corporatism. We used to have a fiery NDP on the Left to guard the gate but that was several leaders in the past.

I can't believe that Tommy Douglas would be happy with what has become of the NDP, Mound.

All the parties know where the money is -- and they all are in the same race.

It's insane that 30% of Canadians support such a travesty and the other 70% acquiesce to it.

Somehow it's hard to think that we live in a democracy, thwap, when the party of 30% support holds a majority of the seats.