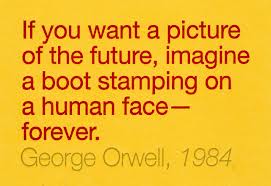 NDP environment critic Meghan Leslie understands how indebted the Harper government is to George Orwell. Rather than reading 1984 as a warning against tyranny, the Harperites have adopted the novel as a how to manual. Their messaging is thoroughly imbued with the principles of Newspeak. Those principles are particularly apparent when it comes to environmental policy. Leslie invites her readers to consider Harperian definitions for the following terms:

“Consultation” means talking to a hand-picked group of friends who share your agenda, and perhaps posting a document on a website to solicit comments — with no disclosure of what the comments were and, likely, little consideration of them. No need to give any reason for the decision you were going to make all along, either.

“Open and transparent” means holding a record number of committee meetings behind closed doors, requiring the Parliamentary Budget Officer to take you to court to get basic information on departmental spending, and erasing pesky words like “environment” from websites that contradict your new reality.

“Accountable” means proroguing Parliament when your government is found in contempt for hiding documents from Parliament.


Orwell warned that those who called themselves socialists were not really socialists, just as the party which calls itself Conservative isn't really conservative. He understood that people like Stephen Harper really didn't have a philosophy. But they did -- and do -- have an objective. “If you want a picture of the future," O'Brien told Winston,  "imagine a boot stamping on a human face—for ever.”

This entry is cross posted at Eradicating Ecocide.
Posted by Owen Gray at 8:20 am

Email ThisBlogThis!Share to TwitterShare to FacebookShare to Pinterest
Labels: Harper And Orwell

Well said, Owen. The facility with which the Harper regime employs these tactics bespeaks the depth of its contempt for both democracy in general and the Canadian people in particular.

And what is frustrating, Lorne, is that they get away with it. So much for accountability.

Since Harper's, so called majority. Canada has been in a downward spiral, right down into Harper's gutter.

What names did Harper and his Cons call Canadians? Eco terrorists, siding with pornographers. Jack Layton the Taliban. Right on the House of Commons TV channel. Harper himself said. The NDP supported the Nazi's.

I am no Liberal. However, I was furious at Justin and MCGuinty for apologizing. Harper and Alberta deserved no apology, what-so-ever. Harper and Redford personalities, are a dead match. They arrogantly seem to think. Alberta has the God given right, to force the dirty Bitumen into BC.

Any province not wanting to go down, into Harper's gutter, should leave Harper's Canada. Do you really think, Harper will quit his insanity? Not on your Nelly.

We live in hope, Anon. Surely, Canadians will get tired of being treated with such contempt.